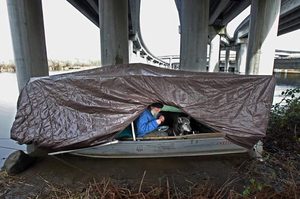 William Kaphaem and his dog, Lulu, live in an aluminum 14-foot rowboat in a foot of water under the Highway 520 bridge in Seattle.

Under the concrete pillars of the Highway 520 bridge, anchored in a foot of water, William Kaphaem and his dog, Lulu, live in an aluminum 14-foot rowboat.

They seem to have found peace at the edge of the Arboretum.

Kaphaem has rigged the boat so it’s covered by a 20-by-18-foot brown plastic tarp, with a few feet of headroom. It seems to blend in with the muddy bottom by the bridge posts of the Montlake Boulevard East exit.

You wouldn’t even know there was somebody inside unless you yelled over the noise of the rumbling cars and trucks above, “Hey, Three Stars!”

Kaphaem, 51, says he has Mohawk ancestry and so he prefers to be called by that name, which reflects the outdoors.

Hearing your voice, Kaphaem — Three Stars — will lift up the tarp that serves as his cocoon.
“Actually, a lot of light gets through,” he says.

Inside his rowboat home, he sometimes reads, and often listens to a baseball game or KIXI-AM easy-listening classic hits on a battery-powered radio with a headset. He handrolls cigarettes with filters.

Across a couple of the benches, he has laid a sheet of plywood that serves as the backing for his bed.

He has a Coleman lantern and a stove, making sure to ventilate when heating some soup or frying up fish. For cold nights and days, he wears three or four layers of clothing.

In the boat, he has five spinning rods, and, using worms, manages to catch perch, bass and the occasional trout. He has a collapsible trap for catching crawdads, which he plans to use in the summer when he rows up Lake Washington to the Sammamish Slough. 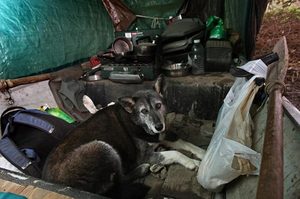 Three Stars has Lulu to keep him company. He says she’s a mixture of wolf and husky who is closing in on 10 years.

He has a close-up view of the wildlife there.

Among the some 2,400 homeless counted living outside this January by the Seattle/King County Coalition on Homelessness, his is one of the more unusual living arrangements.

The way he sees it, he and Lulu didn’t have much choice: the streets or here.

“I’ve got a lot of stuff. I didn’t want to schlep it around town like some tramp,” says Three Stars. “I’ve got more dignity than that.”

Early in 2010, after the death of the elderly owner of the West Seattle home in which he was renting a room for $150 a month, Three Stars had to find cheap lodging. 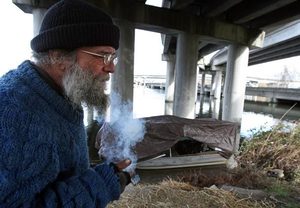 William Kaphaem, aka Three Stars, who lives in a 14-foot rowboat at the edge of the Arboretum, says it’s “a very peaceful experience.”

He lives on $636 a month SSI, the government’s program to help the aged and disabled.

That allows him to take the bus to the Safeway on Capitol Hill and shop for food for himself and Lulu.

When he leaves for a few hours, Three Stars puts on waders and anchors the boat maybe 10 feet from shore. Once, he knew that somebody rustled through his boat. Another time, somebody untied it and it drifted off.

Now, if somebody wants to mess with the boat, they’ll get soaked in 3 feet of water.
Three Stars qualifies for SSI because, as he explains it, he’s got the kind of attention-deficit disorder “in which like I had 40 jobs in two years, and I got fired in all of them … Burger King, grocery store … sometimes I can’t shut my face.”

He doesn’t mind sharing his life’s details, such as growing up in Massachusetts and Florida under less than nurturing family situations.

A vocation that did suit him was as a street musician.

He learned to play the guitar on his own, and traveled around the country. He ended up here in 1980, he says.

“This hippie in New Orleans told me about Seattle, said they wouldn’t persecute you for playing in the streets,” says Three Stars.

Some of you might recall seeing Three Stars and Lulu on the sidewalk outside of Pacific Place in downtown Seattle.

He would play the guitar and sing a lot of country standards. Lulu, which Three Stars says is a mixture of wolf and husky, and is closing in on 10 years, would keep him company. They’d earn a few extra bucks.

He stopped playing last year, he says, because of tendinitis. “My wrist was falling asleep,” he says.

For a number of years, says Three Stars, he even lived a kind of family life, fathering a daughter, living with her mother (now deceased, he says) in motels and subsidized housing.
He says his daughter now is 24 and that he keeps in touch with her. He says she’s going to let him use her apartment to wash up and do laundry.

Under the bridge, he doesn’t bother anyone; and those who know about him leave him alone.
State Department of Transportation workers working near the bridge one day recently just shrugged him off.

But John Moriarty, the 13th Coast Guard District assistant division chief for waterways management, when asked about a boat such as Three Stars’, says, “Now we’ll have to check him out.”

They have concerns. For example, what is Three Stars doing with his waste? wonders Moriarty.

Three Stars says he either bags it and puts it in the trash bins “that go to a landfill” or uses lavatories.

Moriarty says that also, “We want to make sure he’s safe.”

So far, Three Stars seems to be.

He just wants to be left alone.

ResistMuchObeyLittle said:
John Moriarty, the 13th Coast Guard District assistant division chief for waterways management, when asked about a boat such as Three Stars’, says, “Now we’ll have to check him out.”
Click to expand...

Oh man way to inadvertantly rat the guy out lol, hope they just leave him be
•••
You must log in or register to reply here.

Hobbies & Projects Sep 3, 2021
WildVirtue
I hopped freights, hitched, bicycled and squated North America for 6 years, now I am off the road and living in ATX.

The In-Between Sep 15, 2021
thewildkindness
Just some notes that turns into a rant.