When the driver stopped to check things out, he found the hitchhiker covered in snow 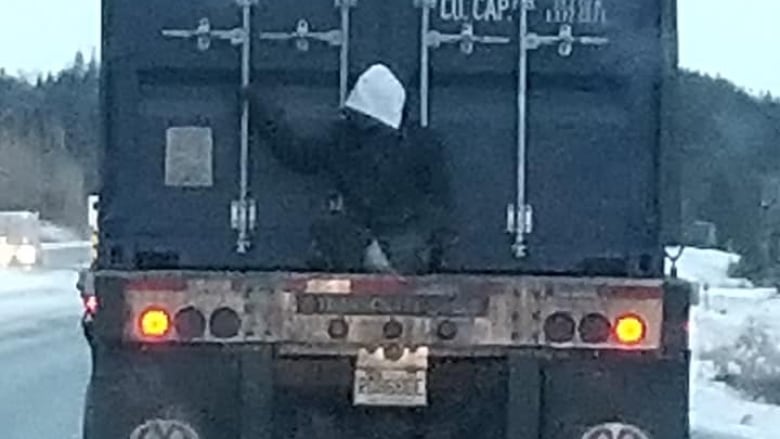 The truck driver says he had no idea the man was there until a driver notified him. (Émile Claveau/Facebook)

A hitchhiker is recovering from slight hypothermia after spending two hours clinging to the back of a transport truck in an effort to get from Alma to Quebec City.

The man jumped onto the tailgate of the truck Wednesday morning as it left a rest stop near Alma, 230 kilometres north of Quebec City.

Dave Tremblay, the truck driver, told Radio-Canada he had no idea the man was there until he was alerted to the situation by another motorist — more than a hundred kilometres away.
When Tremblay stopped to check things out, he found the hitchhiker, covered in snow and frozen.

"He seemed comfortable. He was sitting and had hooked onto the containers I was transporting," Tremblay said. 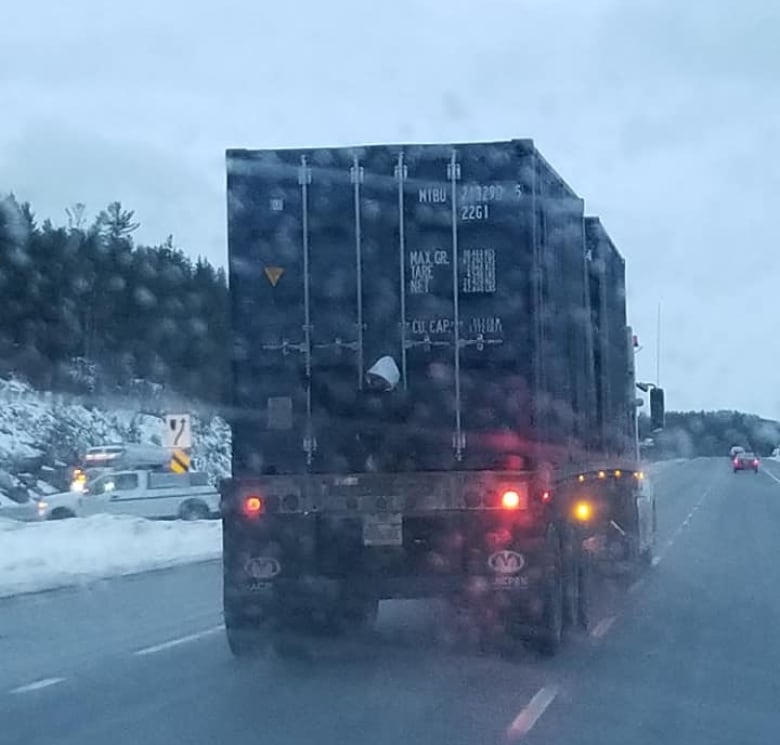 When Tremblay asked the man why he climbed onto his truck, the man replied that no one at the service station agreed to give him a ride. (Émile Claveau/Facebook)

The hitchhiker, a 38-year-old man from Alma, declined Tremblay's invitation to get into the cab. He started walking down the road and was picked up by another car.

Police eventually stopped the car a few kilometres away and questioned the man. He may receive a ticket, according to the Sûreté du Québec.

"The man is only suffering from light to moderate hypothermia. He was treated by paramedics," said SQ spokesperson Hugues Beaulieu. "We received calls from the public alerting us to his presence."

The truck driver says from now on he'll take a second look around his vehicle before heading out.

Well, there's the answer to any thread we've had asking if anyone has done this before

@Laundromatt this could be you but you playin!!
D

I deleted myself
That's one way to do it.
You must log in or register to reply here.
Similar threads
What are your experiences like hitchhiking in Alaska?
What to be wary of?
FL hitch routes
Hitching Canada west to east begining this tuesday.
Thoughts, comments, gear advice or suggested routes hitching Albuquerque -> Durango -> Ft. Collins -> Lincoln, Neb. in May?
Hitching through Tennessee
What do you call a train kid that doesn't hitch? A liar!
Video 1970's TV Movie about Teenage Hitch-Hiking.
Video Found a cool hitching video HOW TO HITCHHIKE CANADA
Hitching issues in the states
Share:
Facebook Twitter Reddit Pinterest Tumblr WhatsApp Email Link

Gori
Salut la famille! Im new here so here's a bit about me!

From France but in Montreal Canada for school so rn only hit the road btw semesters. I do Middle East Studies + Anthropology. challengin af to sit in a classroom again but hey i glad i got to expand my horizons that way, In Quebec I did a bit of wandering tnks to the Great Trail I hitched but mostly walked. Rn Im based in a shack btw river and forest
plein d'amour
Today at 4:24 PM •••

Thewalkindude
Anyone in Minneapolis at the protest, just got back here from Duluth
Today at 3:20 PM •••

nikhil madhusudhanan
Anybody watching the SpaceX launch today?
Today at 10:56 AM •••

Abirdperson
Will do these posts occasionally so family and friends know we are alive and well.
Currently: in Mariposa, CA, getting ready to head to Coulterville, CA.
Today at 8:09 AM •••