Making it home in time for fireworks (1 Viewer) 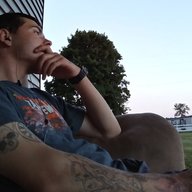 So, on the 3rd, I got on a bus leaving Albuquerque New Mexico and headed to Lafayette, Indiana. I left because it was time. I didnt think i had a place to go except where I already was and some people who really are friends told me rather unpleasantly in a last ditch effort to make me breathe something other than my own ass air and bring me to the light that I was being a big dummy and other things. And they were right and I knew it. This was an intervention. So i called my dad and was like yo I gotta go and I was not at all that cool lol but the next morning I picked up a will call ticket at the greyhound after catching a ride from a friend. I got on and went thru texas and oklahoma to springfield and st louis and to here... Just in time for fireworks. I had to wear a mask the whole way thru and in every building pretty much everywhere. Some guy and his wife both black and from new York got on in oklahoma. Had a big ass pit bull with an that didnt like the driver at all. There was a ruckus involving them at every stop. Just thought id mention that in case maybe someone had encountered them before. Their stories were iffy and they had bad attitudes but the trip was alright besides all the other stuff involved. Like coming down on the bus sucked but it had to be done. Anyways theres a couple pics and a video of the fireworks when I came home. I'm planning on being back and forth between here and NM while I get my shit together. Maybe I'll see y'all out there.

im missing some pivotal things but here ya go