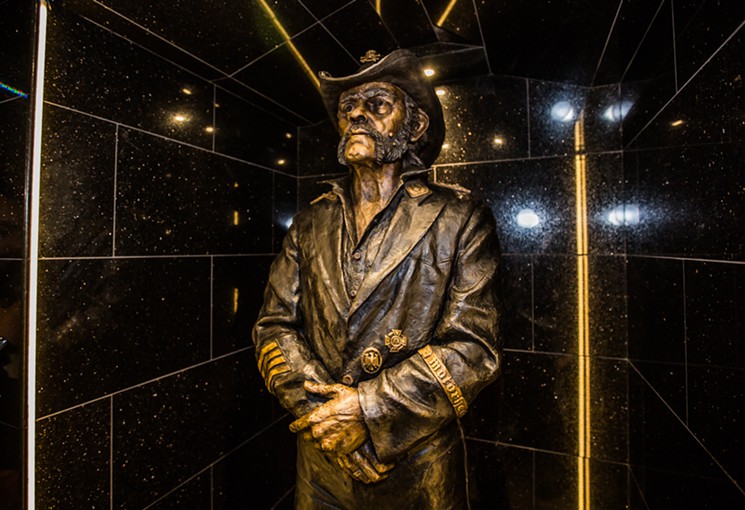 "Lemmy! Lemmy! Lemmy!" chants broke out repeatedly. Jack Daniel's and Cokes (now referred to by drinkers as "the Lemmy") were raised and guzzled. Motörhead songs were sung at the top of many a nicotine-worn lung.

On the back patio of the Rainbow Bar & Grill last night, the statue memorializing Lemmy Kilmister was finally unveiled for the first time before a raucous, jam-packed crowd. The bronze likeness stands inside a black boxlike structure in the rear corner of the legendary locale where the departed music legend used to hang out, drink and play video poker. After last night, Lemmy will stand proud there forever, resting not in peace but in rock & roll love and honor.

It's a testament to the fans that the statue even exists. They chipped in more than $20,000 via online fundraising (spearheaded by Hirax lead singer Katon DePena) to make it happen. And that was just for materials. Local artist Travis Moore did the work for free after vying for the gig and being chosen by Rainbow owner Mikael Maglieri. 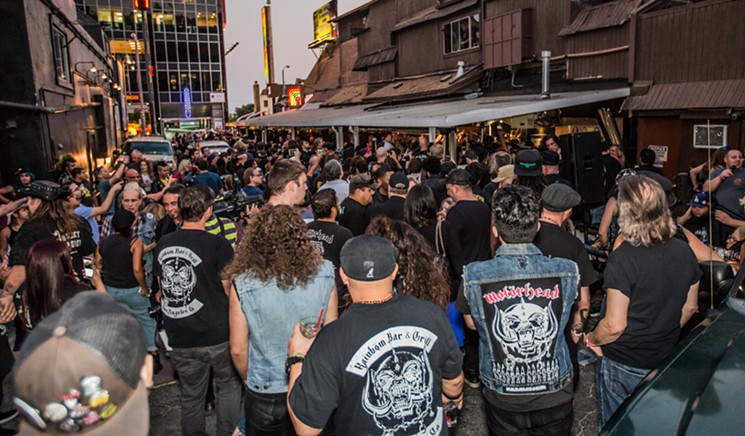 A black curtain was swiftly removed, then a wooden plank behind it, to reveal the piece. The life-size sculpture — based on a famous Lemmy photograph by Robert John — features shades of black and metallic bronze throughout, with detailed lines and strategic crevices capturing Kilmister's familiar features, from his bristly whiskers to his infamous moles to his signature hat and boots.

Most of the hordes of fervent fans who crammed into the patio, inside the restaurant and in the upstairs bar got a chance to see and pose for pictures with the figure soon after it was revealed. But for the fans who got there later, it required a dedicated wait; a long line snaked outside of the Rainbow and stretched down Sunset Strip and around the corner. For some, just being in its presence, if not actually seeing it with their own eyes through the crowds, was enough. Most in attendance had met the rock god in the flesh, as he was ubiquitous on the Strip until his death last December. Despite his gruff demeanor, he was always gracious with fans. 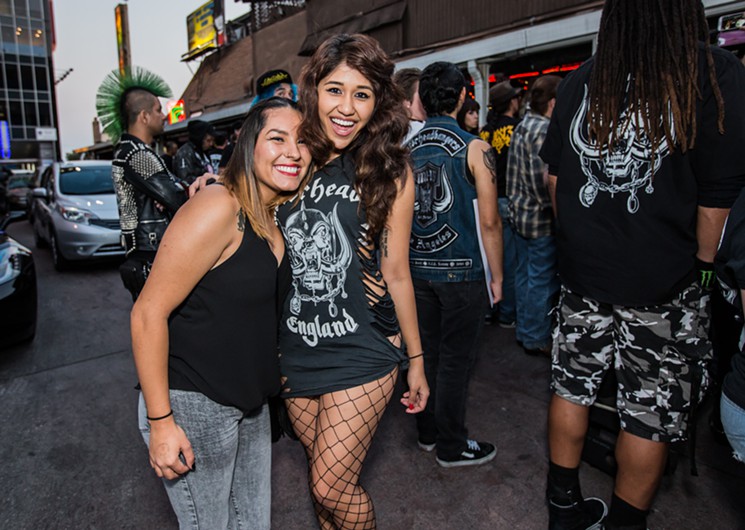 "We’ve seen him here so many times over the decades, and he was a super cool guy," said local Hollywood musician Ruby Carrera; along with his girlfriend, Kitty Cadillac, he didn't fight the chaotic crowd to actually get next to the statue but felt being there was important. "This is a significant event. He’s just synonymous with this place. He was at Jumbo's [Clown Room] a lot, too, but this place the most. We just wanted to be part of this historic night."

Hardcore admirer, DJ and singer Edward Transylvania made sure he was there early and right up front to see it first. "Tonight was intense, " he said just after the unveiling. "I was standing next to Paul, Lemmy's son; it was a very emotional moment. I got the chills ... it was a religious experience. Everyone came tonight to give praise and respect to Saint Lemmy, and that is a beautiful thing. The Rainbow is now a rock & roll church."
•••

Hobbies & Projects Sep 3, 2021
WildVirtue
I hopped freights, hitched, bicycled and squated North America for 6 years, now I am off the road and living in ATX.

Art & Music Mar 29, 2020
kriminalmisfit
Just some notes that turns into a rant.