"Give up the condo life, and all your flaming worldly possessions …"
– The Narrator, Fight Club (1999)
And so I did. The story of "the rich young ruler" in the Bible always got to me. I was always ashamed that I was holding onto everything I had. The funny thing is, now that I'm not, I feel more avaricious than ever.

I'd be more selfish, less moral with my wealth, if I got it back. I'd want it all for myself. Because I know what deprivation feels like; I know what poverty feels like. To the wealthy boy who's known comfort all his life, poverty seems like what he needs. To the impoverished man, wealth seems like the only thing worth striving for. The grass is always greener on the other side of the fence.

Part of me thinks I'd be fine if I just gave in, embraced the discomfort. Another part of me says, not with a cold coming on. Keep your throat away from that soreness no matter what you do; you'll be miserable if you don't. The first part fires back with: that's all just a part of the discomfort. But not if I catch something worse. Not if I have to go to a doctor. That's money I don't have. A cold I can deal with; bronchitis or pneumonia? I can't. No, I'd better take this slow, just slow enough to not get stupid.

The rain is making a small flash flood in Los Angeles. Call me a nerd but I can't help thinking of Blade Runner. Sometimes it's drama like that, the fantasy of it, that gets me through the day when I'm stepping through three inches of rushing water and finding out the hard way that my boots are water-resistant but not waterproof, and my socks just got soaked. I'm walking around with my feet in sloshing leather-and-nylon buckets and my thin poncho billowing around me like a cape, and part of me's miserable because I hate being wet. The other part of me's thinking of how cool this looks, and yeah, it is pretty awesome.

One of the greatest moments in my life was getting caught in the rain in a T-shirt and walking a handful of blocks like that. But I didn't have a phone back then, or anything else that could get really and truly destroyed by water. I do now, and I don't have a home to go back to. I can't just go and take everything off and get showered and dry. I have to be careful.

Once I get to a dry spot next to the Metro station in Hollywood, I untie my shoes, and change socks one by one, standing on one leg while I do it. I'm pretty good at that. My balance and strength is enough to keep me on one leg for five minutes. It comes in handy at times like this. There's a piss puddle right next to me and I don't want my feet touching the pavement. With relatively dryer feet, feeling infinitely more comfortable, I take the subway straight to Union Station.

"You can check out any time you like, but you can never leave." The rainstorm cemented that idea in my imagination. This place really doesn't want me to leave. At first it was money and stability that made me want to stay for a while. A few days ago it was the train lines under repair for the weekend that kept me in the city. Today it's raining buckets, more than I've seen it do since I got here three months ago. I feel like I'm barely escaping with my life, under the severe displeasure of some cosmic force. The whole thing feels like the Amityville Horror.

I'm sitting in the leather seats in the huge main lobby at Union Station Los Angeles. Someone's playing a piano and the sound echoes through the whole space. Sunshine -- Adagio in D Minor. Now it's the Minecraft soundtrack. It's not perfect technique, they're still learning the set, but it's a good set.

Me and a hundred other passengers are standing on the cold, grey platform now, as a voice announces that the train to San Diego is leaving in five minutes. There is no train. You'd think they have to arrive here before they can depart again. The absurd idea that I'm finally going to be prevented from leaving, yet again, enters my head. I can't believe it.

Ten minutes later, the train arrives late, and I find a seat and all is well for the next two hours as we speed down the coast. I forgot how much I love travel. Just seeing different places is enough to make up for the scary parts, the unpredictability. This is why I really came out here; not because of some spiritual expedition or self-improvement pursuit, but really just because deep down, I love to wander and explore.

Getting a hotel in San Diego was definitely a terrible financial decision. Between that and what I spent on food just today alone, I'm coming down to my last couple hundred bucks. It's not looking good. At this rate I'll show up to Slab City with double digits instead of triple in my bank account. I'm sort of counting on being able to find some opportunities out there. At the end of the day, though, I can still take satisfaction in having escaped the trap of Los Angeles, even if I had to chew my leg off to do it, and even if that leg was most of my money. I'm free.

I will be going back, though. My cousin is coming over in late May so I'll go back to meet her. She and her friend also want to head to Tijuana, so heatdeath if you're seeing this, if you're still there in May then maybe we could all meet.

But until then, I have nothing better to do than go on another adventure, and face the unknown. Who knows? This could be fun. It worked out surprisingly well last time. I haven't hitchhiked in too long.

The only destination I have in mind is Slab City. Hopefully I'll be there within this week. Anybody hanging around there at the moment?
••• 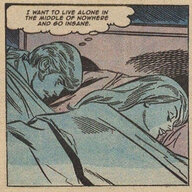 Nice read! Looking forward to the next update.
•••

Thanks! That's coming soon, hopefully. Hitching a ride east was harder than I'd counted on.
•••

Jim said:
Thanks! That's coming soon, hopefully. Hitching a ride east was harder than I'd counted on.
Click to expand...

dirtydouglas said:
Did you make it to Slab City?
Click to expand...

Not quite. It's 3:40 here and somebody gave me a ride to a casino / truck stop about halfway between San Diego and El Centro. She wants to have me for dinner at the casino in about an hour so I'm gonna wait for that, then try catching a ride out again. Shouldn't be too hard from here. Somebody already gave me some food and talked about maybe giving me a ride, but El Centro was a little out of the way for him.
•••

You can paint pictures with words my friend. Keep posting.
•••
You must log in or register to reply here.

Travel Stories May 14, 2022
Dmac
Round Three is One Long Break