I'd like to share some photos of my travels this spring. I'm not usually one to post stories of what I'm up to but feel this can be some contribution considering the forums here have aided me in my travels. After spending a week in Salt Lake city Utah going to strange dystopic hotsprings, a beautiful shadowy show and getting stoned before seeing space jesus at the Mormon temple, I continued East, away from the familiar cascade mountains and into the sprawl, as the manufactured crisis spread. I trekked to Provo wading thru fields of dry rattling thistle stalks to the hopout (where I spotted @Coywolf's tag) 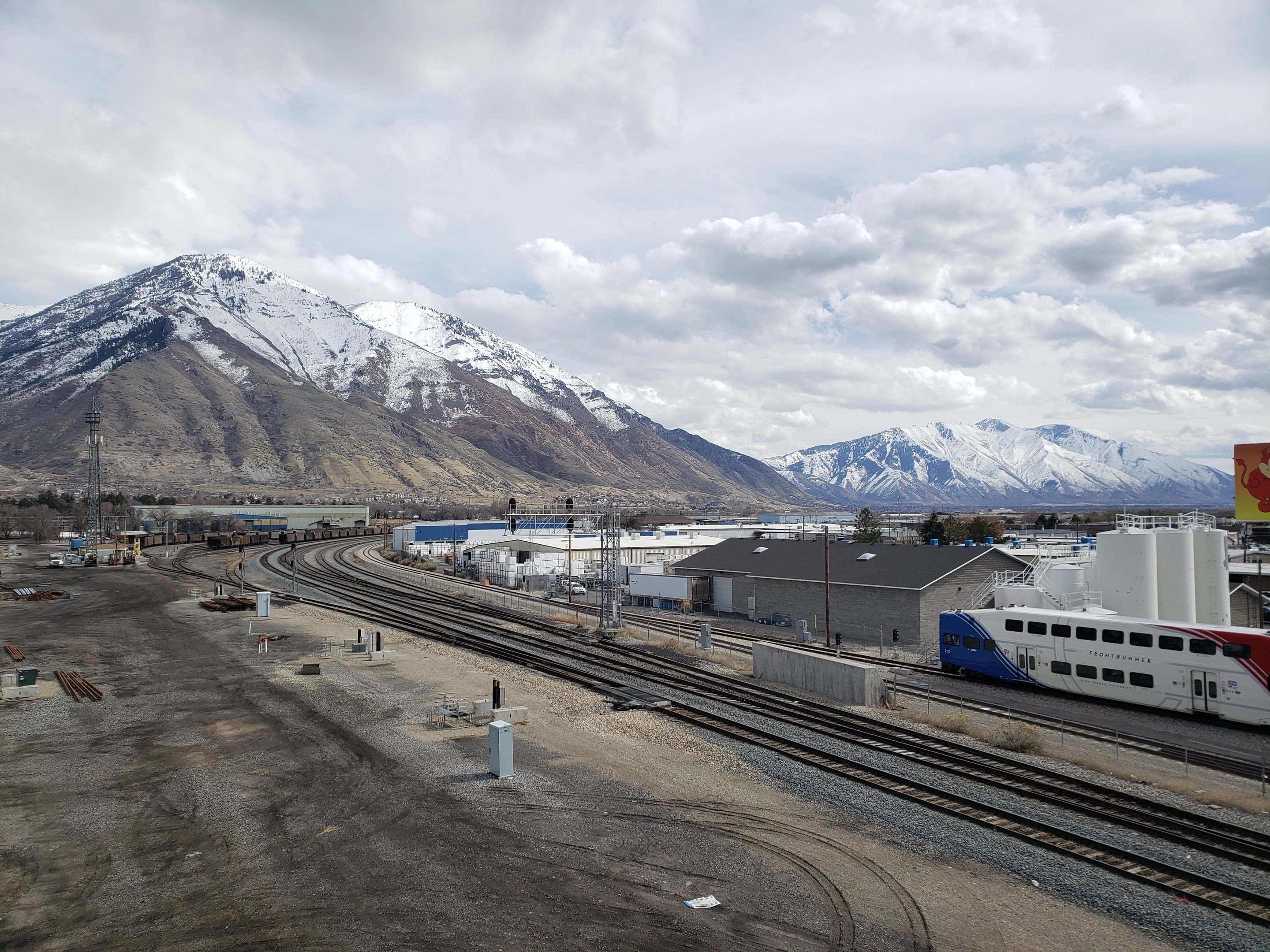 I caught a grainer with a modest porch and very little as far as a hidey hole and took off into the night. The full moon illuminated the beautiful desert canyon and I gazed at her thru the brisk wind before settling into my bed as we grew closer to colorado. Dawn broke as we sided out in glenwood springs and as that liminal night faded we continued into the heart of the rockies. 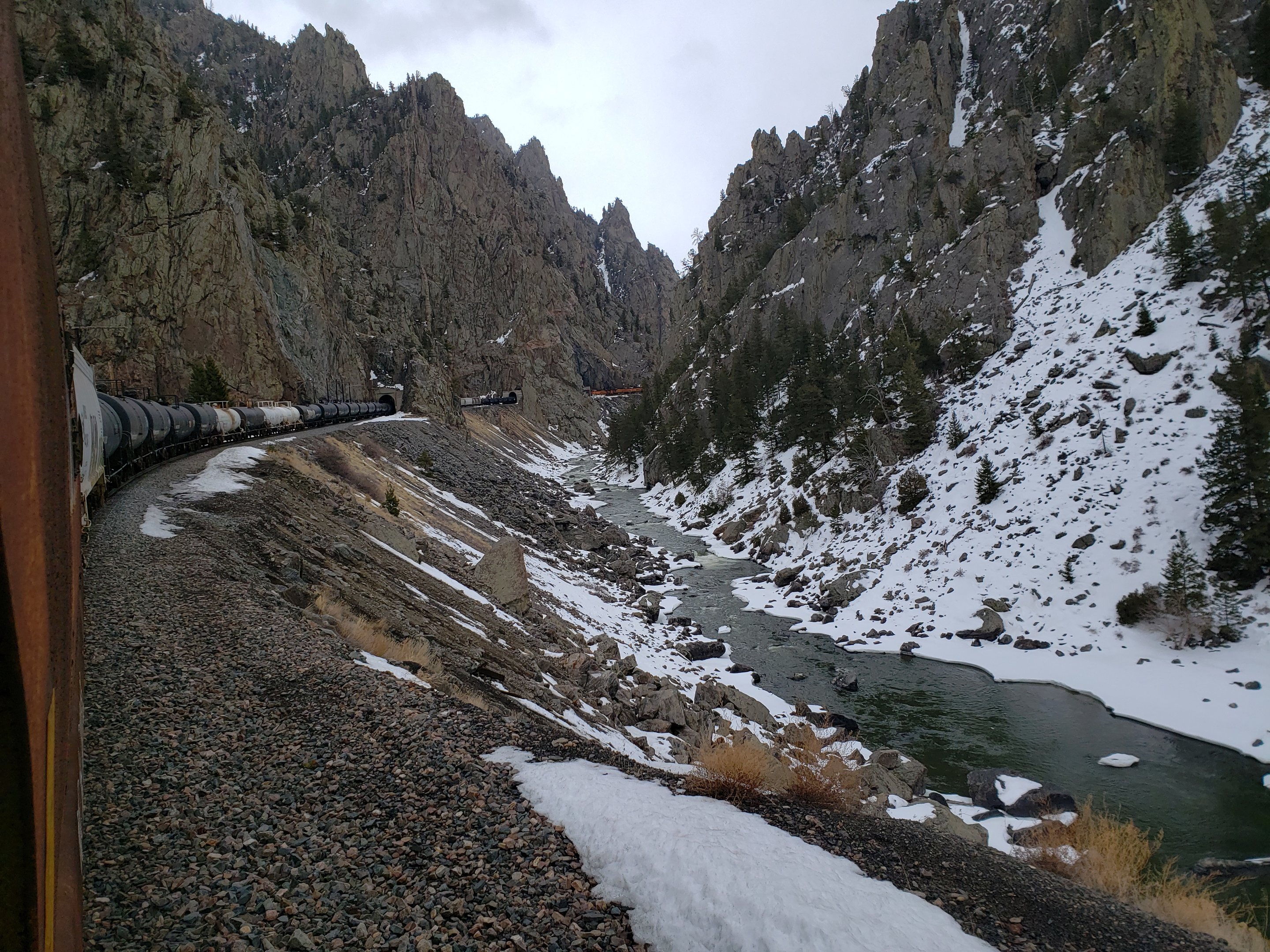 It took about 15min to burrow through the heart of the continental divide, to pierce the void via the moffet tunnel. I breathed through my shirt and thought about the air pollution and clouds of smog the future generations will inherit. I thought about climate chaos and how we stand In the middle of those who came before and those who will come after.

The descent through the flat irons and into the front range was swift and gorgeous.

I rolled into denver just as d the sun was slipping behind the mountains. I slept by the river and found the bridge I would wait for my southbound coal at. 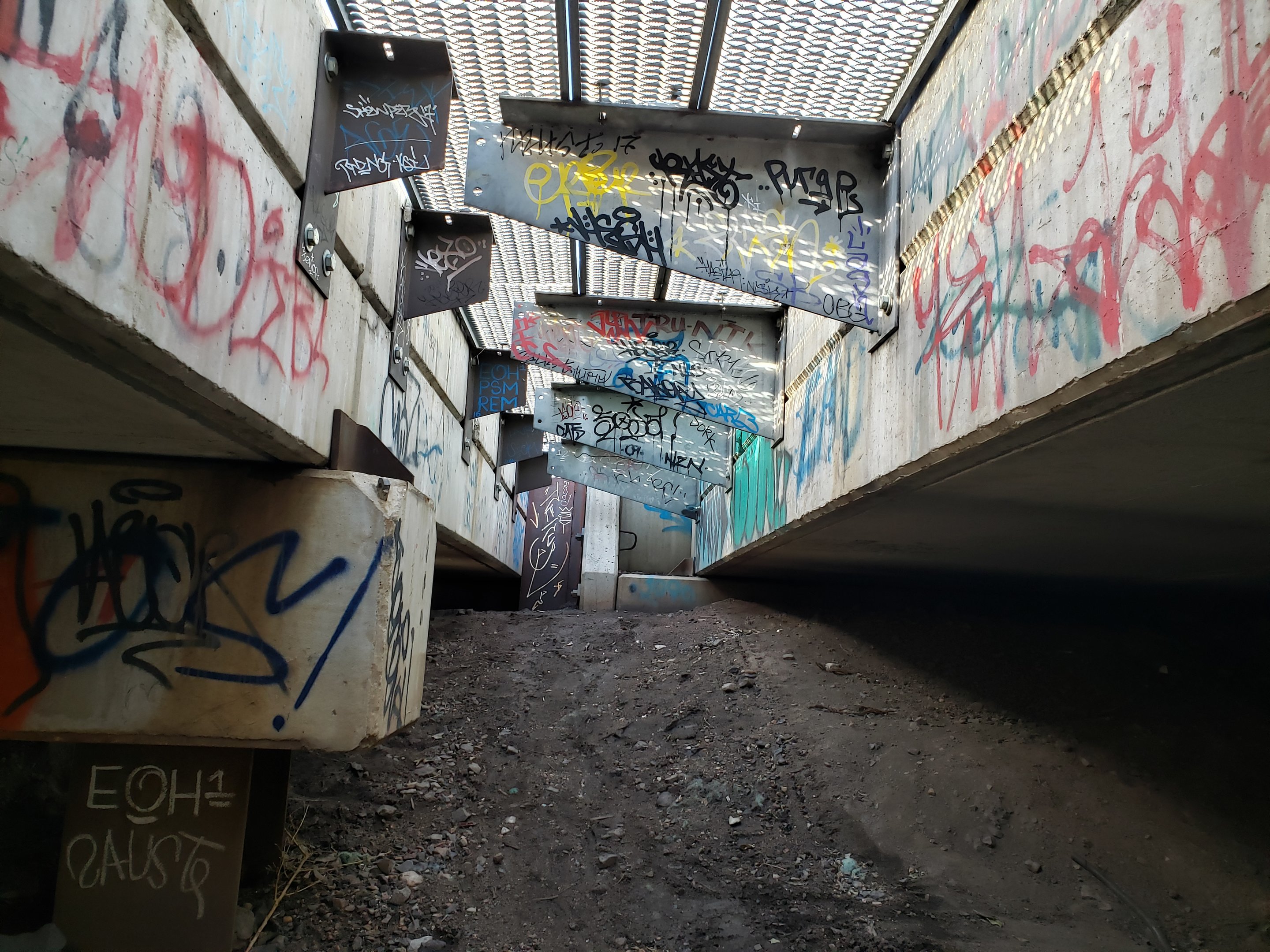 Everybody in denver was buzzing about the pandemic and the little store by the hopout was cleared out of many things (I was forced to get a pop top gallon of water, oh no!).

My southbound coal pulled up quickly and I threw myself in, in plain view of the McDonald's drivethru line. 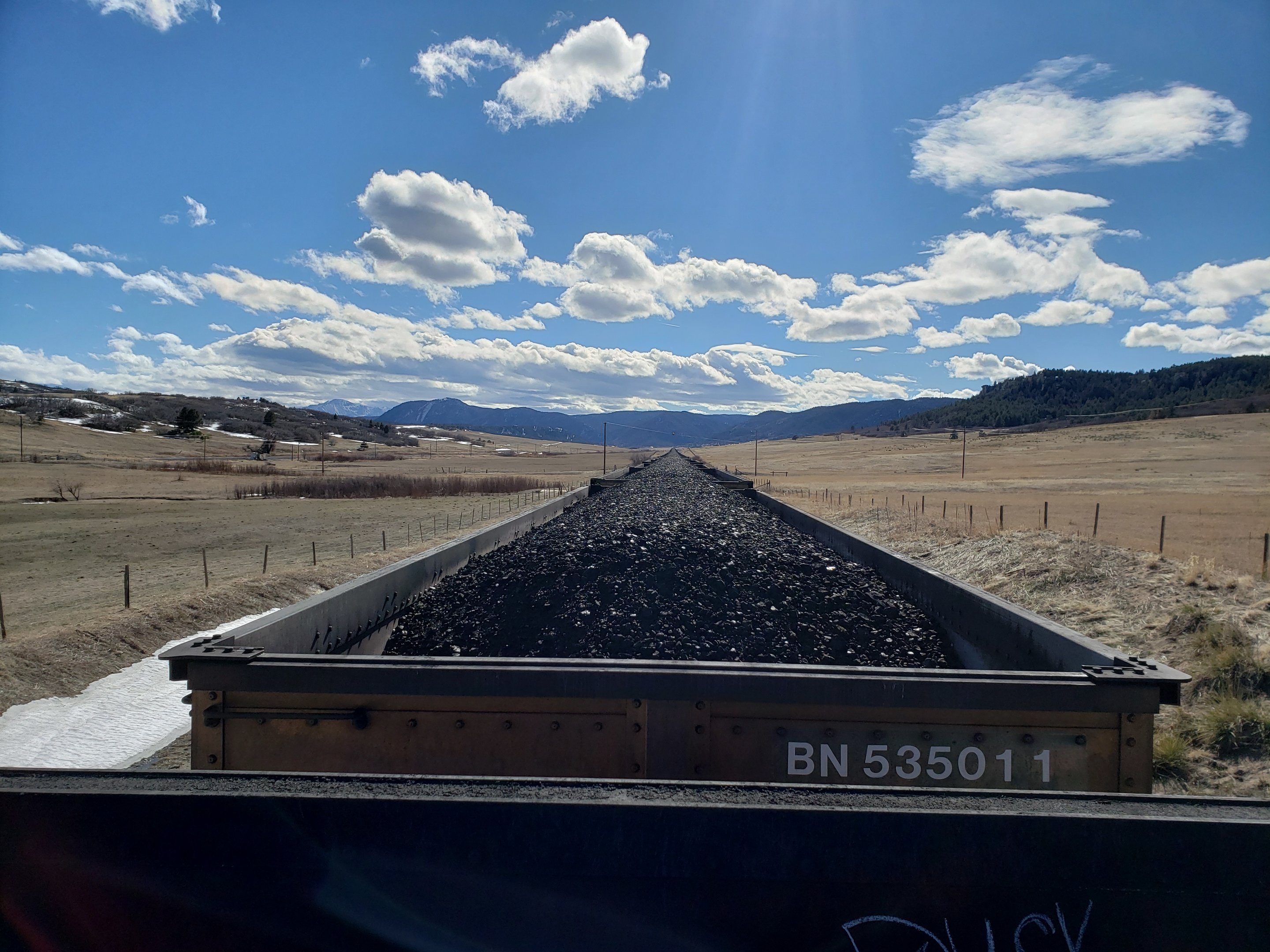 Thru strange industrial fringes parallel to the snaking spine of mountains.

The ride to Amarillo took much longer than I thought, I slept a rough grimy night in the coal, as it ground into my clothes hair, grooves in my fingers and palms. The raw guts ripped from the earth to be devoured by the leviathan. I woke feeling aged older as the sun rose over the texas desert lands. 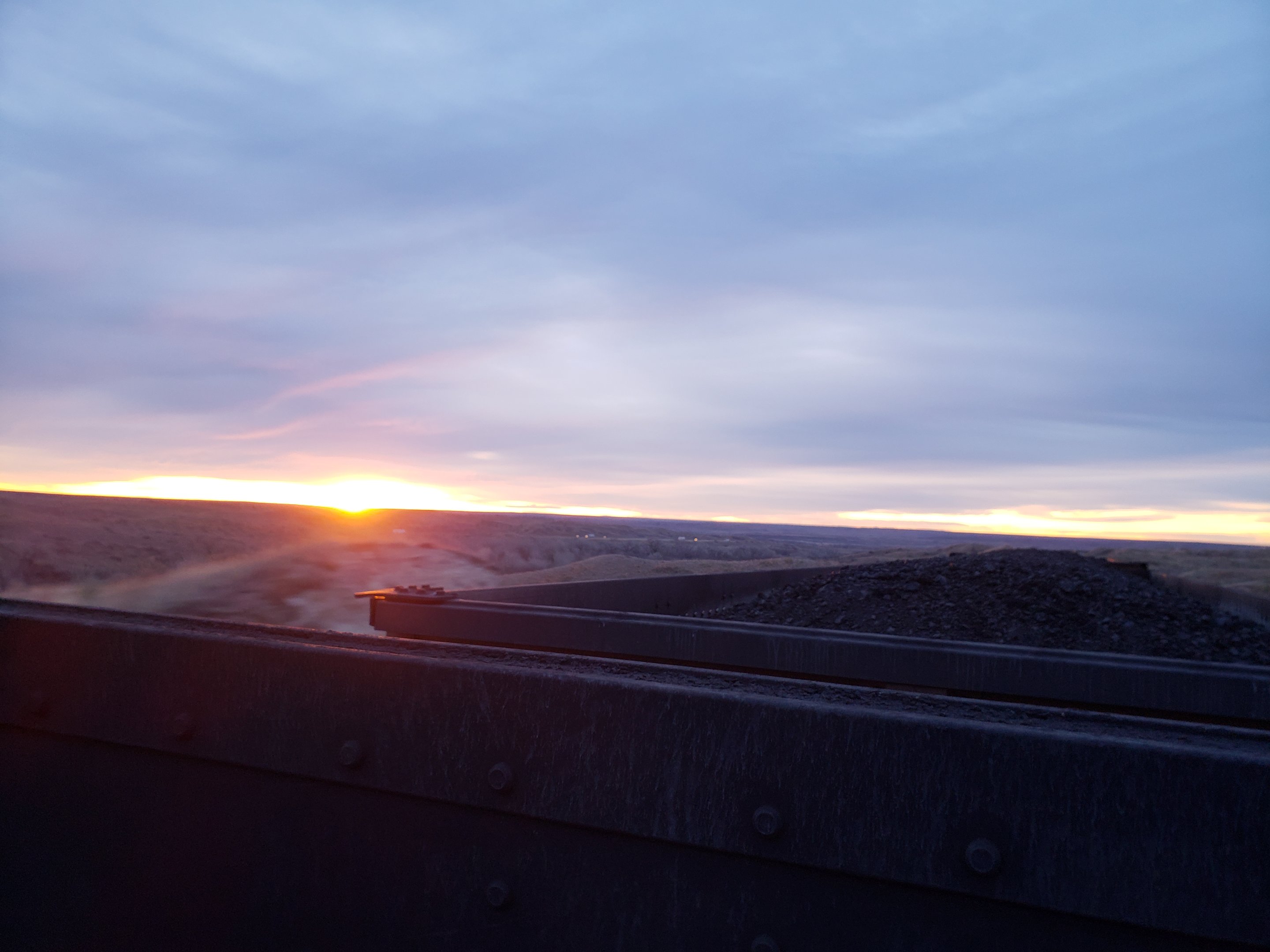 I looked haggard as fuck walking Into an amarillo coffeeshop to take a sink shower, but the barista was very kind. I sat around the very busy yard trying to use the cc's outdated ID siggestion to decipher which IM was headed to Memphis rather than KCMO. After a day by the tracks I got a hot tip from a very kind member of stp and caught my Mem/Atl bound hotshot the following morning.

I though I was going to outrun the storm rolling in from the west but it caught us in Oklahoma and thrashed me in my mini well. I got completely soaked overnight thru my bivy sack (the seems are as all worn out). Lightning flashed all night and I made nocturnal pacts with the train gods in order to ensure my survival. All the next day I cowered in my wet sleeping bag thru more rain and whimpered and ate sauerkraut (the only food I had left)

It stopped raining just outside memphis, I got to see the Mississippi in its grand entirety and hopped off on the fly as my train slowed, cause I was too damn wet and hungry to make it all the way to Atl.

All the stores were empty shelves and everyone was talking about the latest federal response to the virus. The talking heads leered at me as I ate at mcfucks, and I dried off at probably the coolest laundromat I've ever been to. It had soul.

I squatted an old industrial building as another storm rolled in, and got to explore it a bit more in the morning before feral dogs chased me out 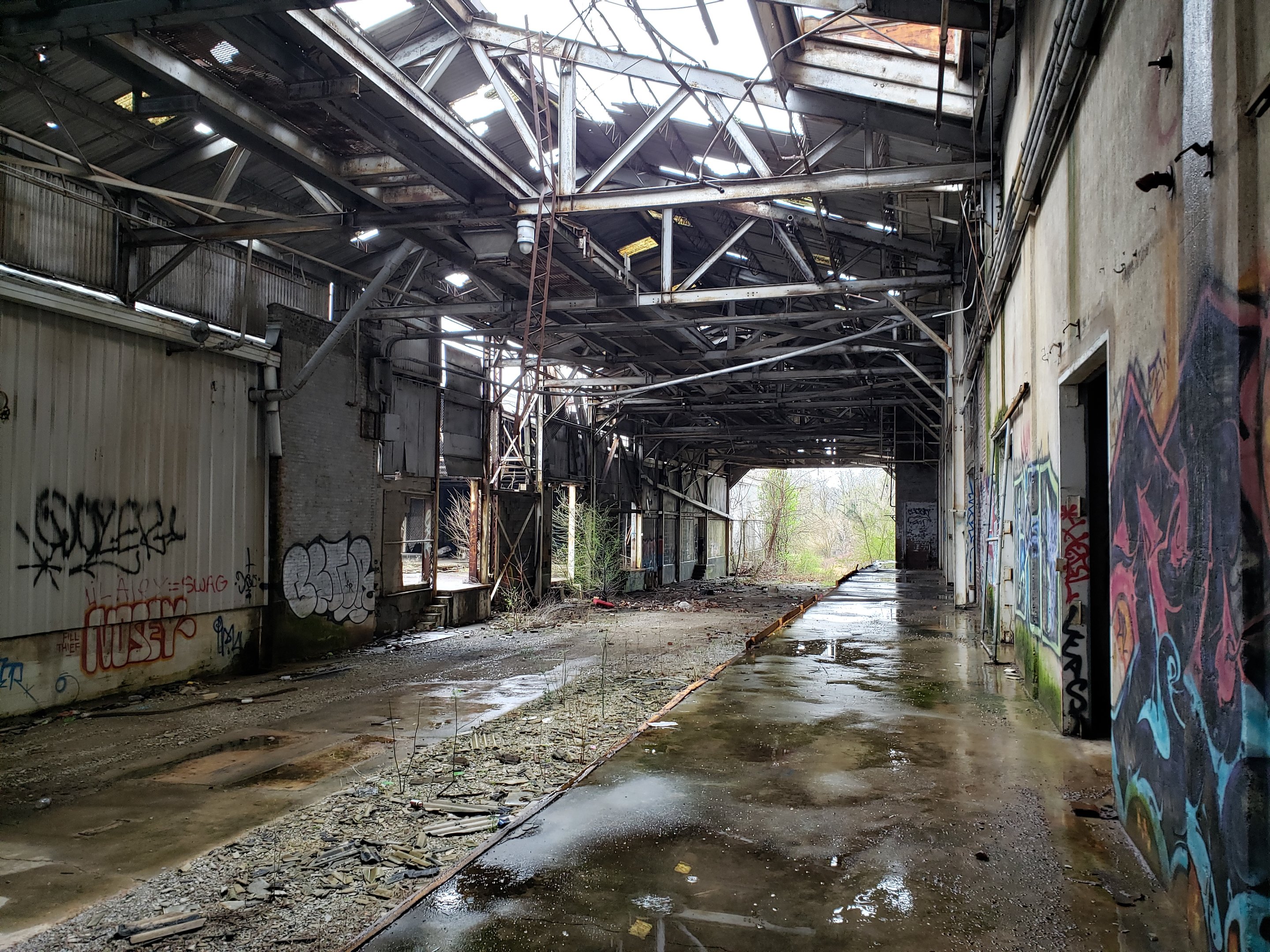 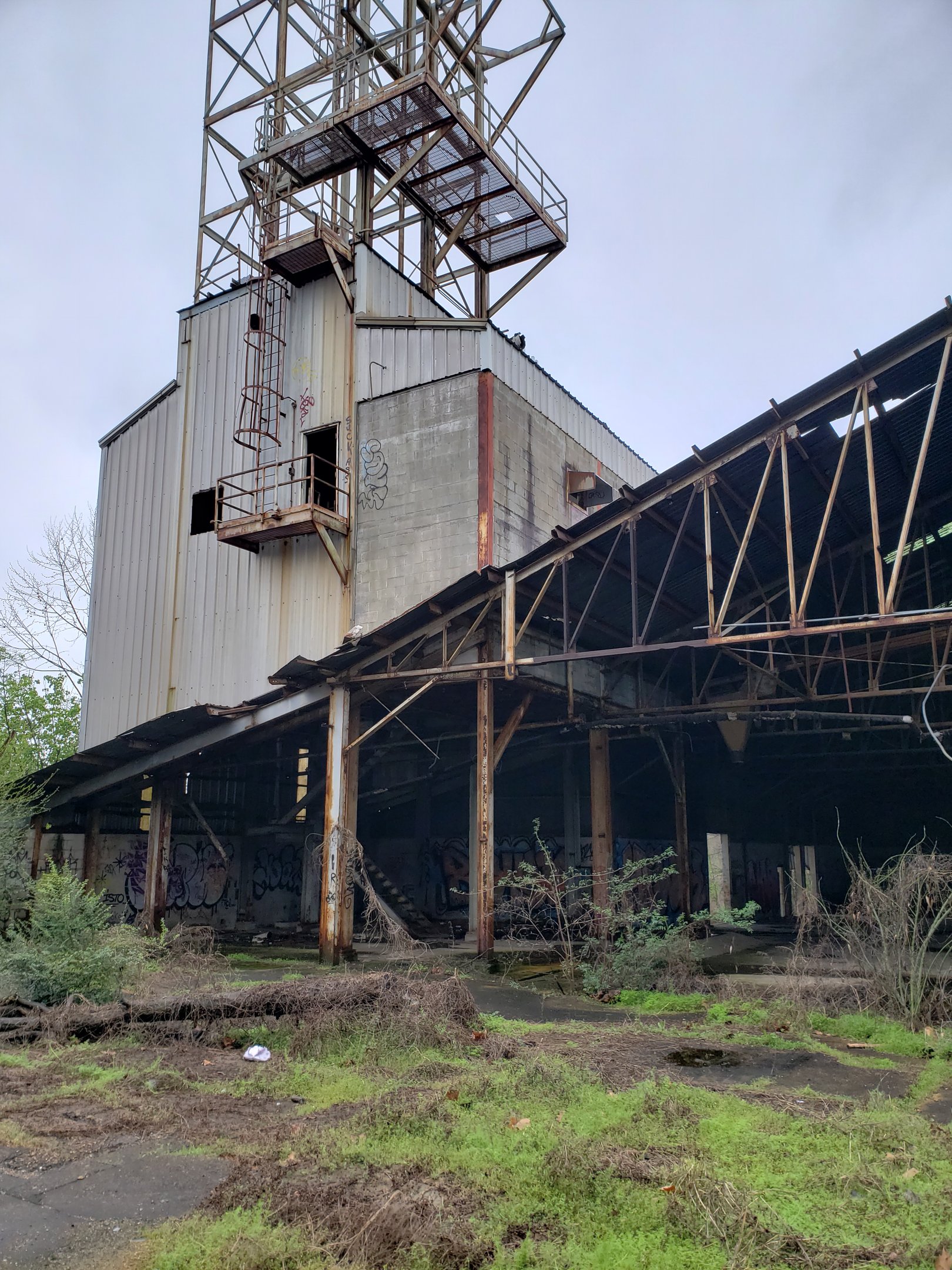 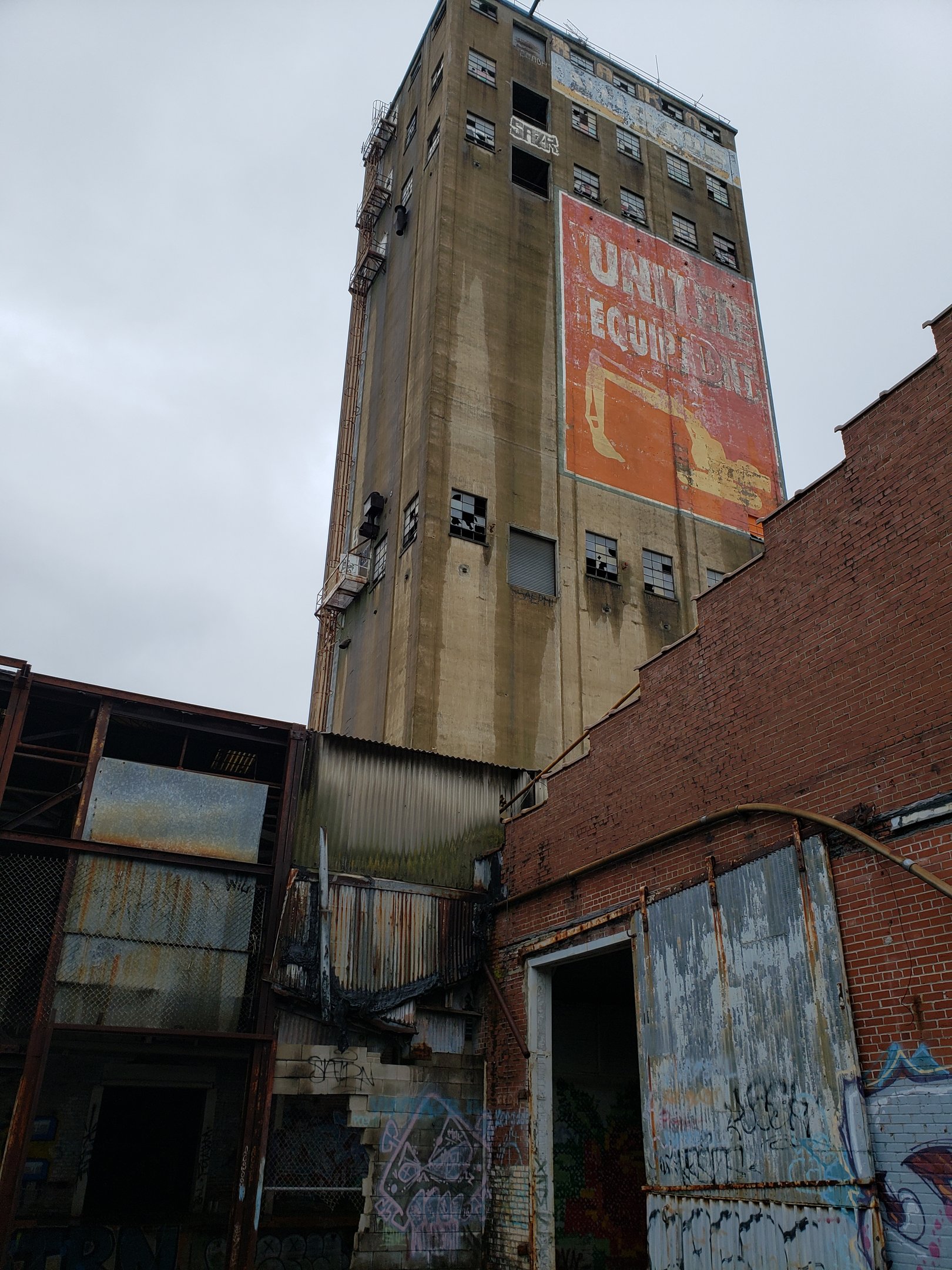 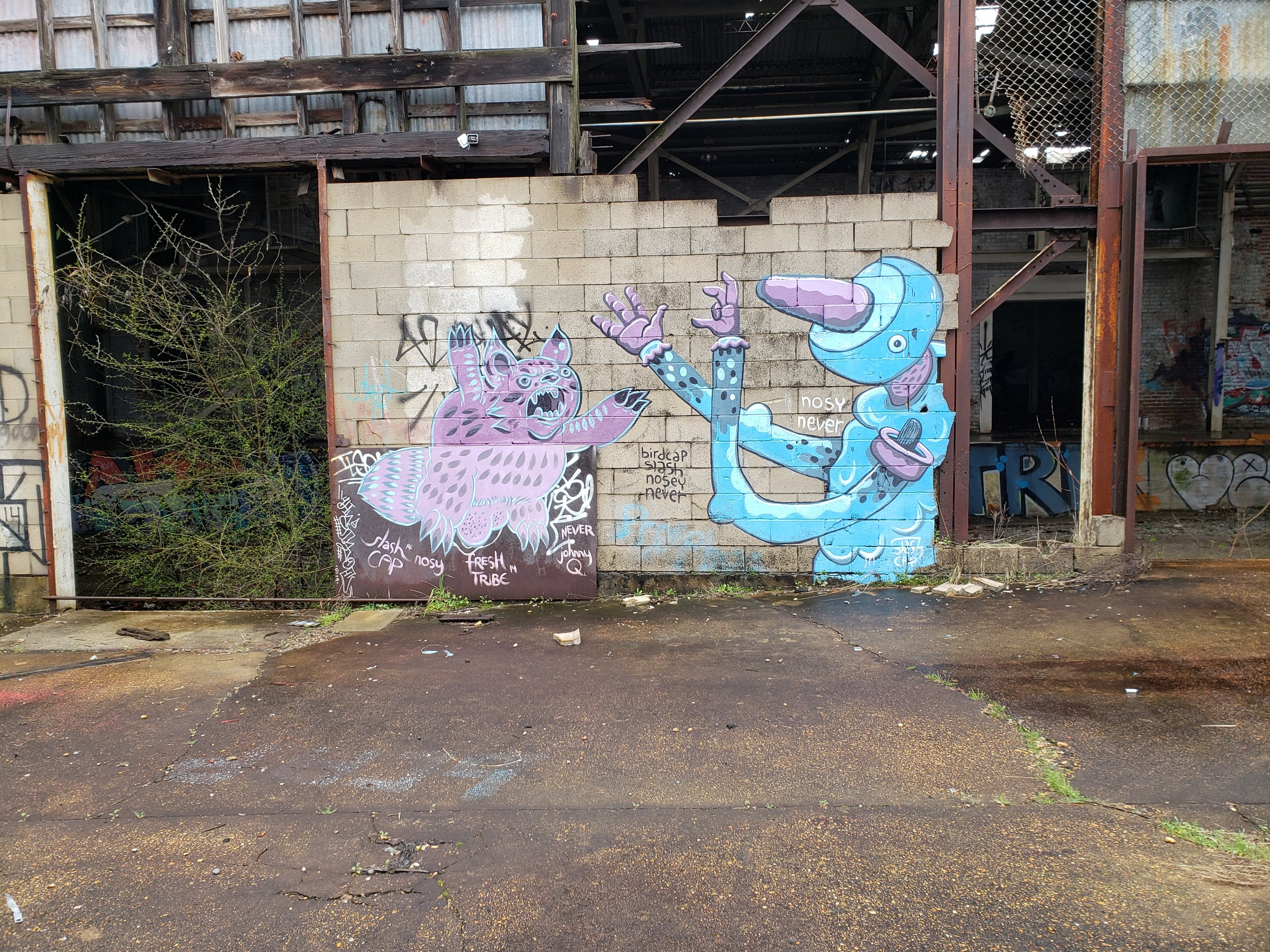 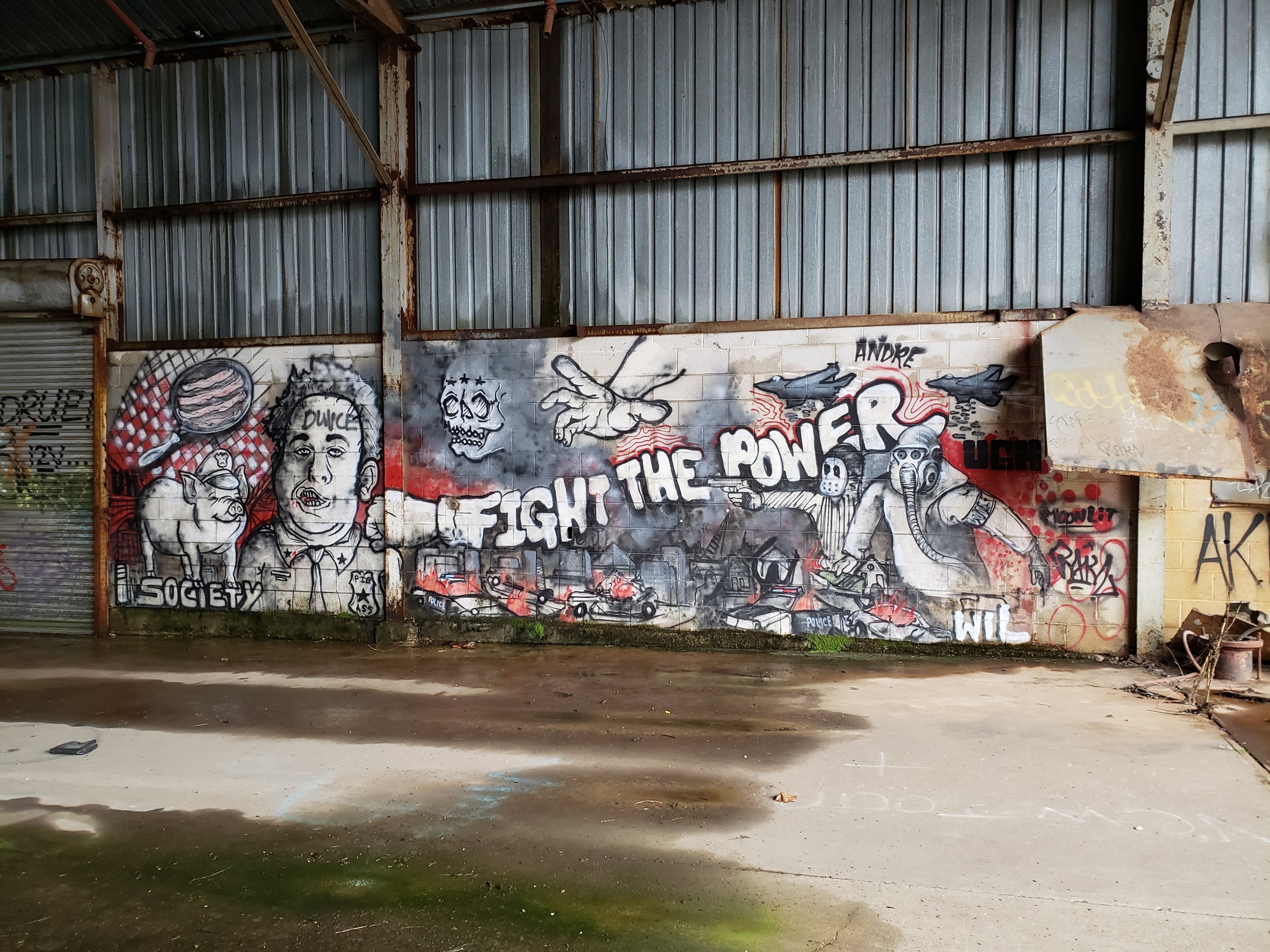 I've been hitching thru Tennessee the past few days and it has been really slow. Fear and paranoia are in the air and public discourse is centered around the virus, potential lockdowns, lack of supplies. It's hard to convey how it feels to be travelling while the dominant culture realizes how fragile and vulnerable it is. Excited to get into the mountains and off the highways. I hope those on the road and rails stay safe in these coming days. The real sickness is the state. The real crisis is this capitalist system.
Last edited by a moderator: Mar 21, 2020
Click to expand...

I closed my account
You know maybe staying put isn't such a bad thing, but at the same time, I wish I could see more of what you're seeing.
••• 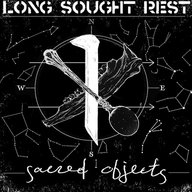 Second picture is beautiful, those mountains are awesome.
•••
D

ScatteredCrowBones said:
Everybody in denver was buzzing about the pandemic and the little store by the hopout was cleared out of many things (I was forced to get a pop top gallon of water, oh no!)
Click to expand...

Glad I could be of some assistance brutha!!!
•••

Great pics and story, I'm glad you got out of Provo alright. Did you catch out of that BNSF yard, or get a UP train on that wye?
•••

I closed my account
Pictures, Video's, and Words really made my day when I first seen this post.
You are truly blessed !!
••• 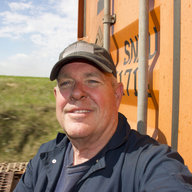 Thanks for sharing that, looks like a great trip, other than getting soaked.
•••

Nice thread! I've added it to our featured threads section! Love the video clips, I'd like to see more of them in any future trips you post!
••• 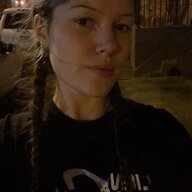 beautiful words and pictures. I hope you find hospitality as you travel forward even though majority of people are living in s strong sense of fear right now.
•••
D 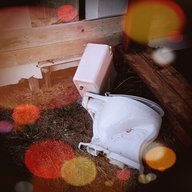 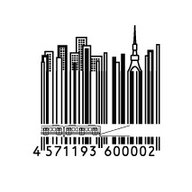 Wasn't it fucking COLD on that train going into Denver? And in the rain, weren't you shaking uncontrollably? Just imagining your struggle through that gives me the chills.

Hope the hitching goes well and you make friends with the future packs of wild family dogs.
••• 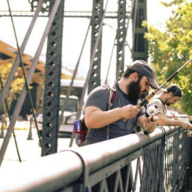 This is really awesome. I've wondered how many people were out and traveling the rails instead of hitching. Its still cold to be riding but I'm glad to see somebody is enjoying the springtime views in the mountains. Be safe out there.
••• 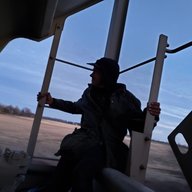 Wasn't it fucking COLD on that train going into Denver? And in the rain, weren't you shaking uncontrollably? Just imagining your struggle through that gives me the chills.

Hope the hitching goes well and you make friends with the future packs of wild family dogs.
Click to expand...

Hey thanks, not a man btw tho. The ride through colorado was definitely the coldest part but I packed for winter riding. Several layers of wool, jacket, winter gloves, 3 pairs of socks etc, hot hands and a propane stove for tea. I was comfortable the whole time even when getting snowed on.

I was much more prepared for dry cold, the rain was pretty miserable but not in immediate danger of hypothermia because of the wool and sleeping bag liner. Know where you're riding!
Done hitching for now, might ride some freight later this month
•••

Yooooo gorgeous photos! And awesome story. Hope you're staying safe n healthy wherever you decide to hunker down for a bit

And i feel ya 100%, wet snow and/or rain are much more difficult to deal with than just cold temps and already-fallen snow! I love riding in cold weather, it's emo & pretty & keeps away the mosquitoes!!
•••

You are a great writer! Thank you for sharing, and taking the time to upload some much needed, wholesome content these days. I'm feeling rather lucky that I have a friend to stay with through most of this frantic climate that society is going through at the moment.. I'm glad you are doing will, and having a hell of a successful trip. Praise sauerkraut.
••• 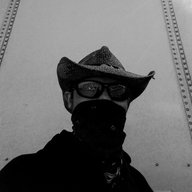 Love it brother! I'm off the road ATM but plan on hitting it soon and see what you're talking about. Fuck the system! Stay safe man

I closed my account
Stunning pictures, what device did you use to take them with?

The framing is superb, makes me want to dig out my camera and do some UrbEx in these biblical times
•••

Thanks, i took them with a galaxy S9. Just explored an abandoned subway system yesterday, feels great to be getting out and around right now. Gonna post some pics and a part two of riding freight soon
•••
You must log in or register to reply here.

My Second Catch Out (NJ/NY)