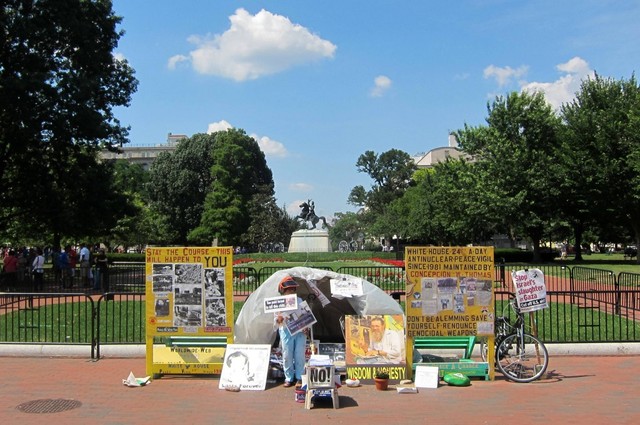 Concepcion Picciotto, a homeless anti-war protester has died at age 80, after occupying an area outside the White House for over 30 years. Ms. Picciotto is a Spanish immigrant, who is known by many as “Connie” or “Conchita.”

She began the longest running political protest in US history out front of the White House in 1981. Since then she has literally lived at the spot, spending 24 hours per day and 7 days a week at the vigil that she created.

The vigil showed a variety of anti-war and anti-nuclear slogans and had coordinated with local anti-war activists to provide information to passers-by.

Over the years, Picciotto’s vigil became a DC landmark for many, and a meeting place for activists.

Throughout the duration of her occupation, she has been attacked my police and citizens alike, arrested, and the government has many times attempted to eject her from the site. However, local support had managed to keep her where she was for 33 years. Recently, her health took a turn for the worse and she began staying at a local homeless shelter where she died on January 25th.
Last edited: Jan 26, 2016

im so sad to hear this. Concepcion was a great person. she gave up everything to be there.. I thought she had been staying at the peace house in dc when not in her little tent...

good news is there are a handful of volunteers keeping the vigil going.

I got to see this site personally back in 2004, it definitely provoked questions as I was an impressionable young kid at 13 y/o

R.I.P. May your message continue to resonate against the war machine. Fuck war.

Man, she deserved better than to be in a homeless shelter. Hope the peace house was a good scene for her.

One small Reed against the wind..

i hope she was well cared for.. i suspect she was..

it takes real strength to claim freedom, like that..

she is way more hardcore than i could ever pretend..

they probably did it with a 1/2 dozen of their neo-americans, in fucking helmets, pretending to be the shock troops of fucking freedom..

something tells me they let her alone, more or less, because they *know*, deep down inside, not what shits they are, but just how much trouble it would cause, were they to make her 'disappear'...

makes me feel like a weak fucking creep of a coward..

& believe, because even if we learn of you late, we are made more, because you were..

An interesting article about an awesome woman. Thanks @Tude
You must log in or register to reply here.

Urban Camping May 18, 2021
BobDole
B
D
Handbook for bums-don't slink, be gallant around women