Hitchin' Denver To California: What Could Go Wrong? (Pt. 3) (1 Viewer)

The most surprising thing about Salt Lake City was how kind it was to me. A weekend full of lovely coincidences, happy surprises, and a boost of morale that I super needed.

Steve dropped me off at a Walmart off of I-15, and I immediately started making my way to the closest gay bar for a cold drink safely tucked away from the sweltering, sticky heat of the great lake of salt. Upon walking up to the front door of this bar called Try-Angles, I saw a sign forbidding backpacks, and being that I had one the size of my torso on my back, I was reluctant to enter, not wanting to be ejected from the bar. After a few minutes of deliberation, I decided to go anyway, figuring that if I luck out, I get to drink, and if not, I'd be right where I was anyway, so it's worth the 50-50 shot. Fortunately, the bartender was kind enough to let me in after searching my bag for any stray alcohol, and I sat down right in front. Seeing a sign displaying their boast of having the coldest, cheapest beer, I ordered a draft for myself. "Do you want a big one, or a small one?" I ordered the big one without thinking, and a giant 32oz mug was placed in front of me. Fuckin' fantastic.

I asked the bartender about things to do in the city, if he knew where people usually went busking, and if there were any events going on tonight. He was happy to point me in the right direction for the things that I asked about, and then mentioned that tonight was Bears night at the bar. Being a fan of the scruff myself, I decided to stay and hang out for a while. I wasn't in any rush, and my friends weren't getting back to me yet about crash space, so I pulled out a book and started to relax.

A gentleman came up to the bar to order another drink, and asked me what I was reading. I showed him the cover, Becoming Dangerous, and explained that it was a collection of essays, poems, and other literature by queer, poc, and activist witches, and, while sometimes really heavy, was a wonderful read if you're into that sort of thing. He remarked that it did sound interesting, and that I seemed pretty interesting too. I laughed and said that I'd be here for a bit, and that if he wanted conversation I'd be happy to converse. He smiled and walked back to his table.

After finishing my beer, and while searching facebook for events in the city, another, taller fellow came up to me and handed me a nearly full mug of Guinness. Apparently, his friend ordered it, and didn't want it anymore, so he was giving it to me. As I thanked him for the beer, I jokingly asked if he drugged it. He said no, of course not, and I gave a disappointed "awwww." We laughed, not realizing that I'd be eating my words in a few days time. The gentleman who asked me about my book called me over to his table on the patio, and I meandered over with all my gear to make some new friends.

That evening, Bears night was in full swing, and the drinks kept coming. The only thing I paid for that night was my first mug of beer, and I ended up getting more drunk than I anticipated. I ended up being offered crash space, as my friends still had not gotten back to me, and I graciously accepted. I was given a couch to sleep on, being snuggled by some very cuddly cats, and I slept better than I had the night before.

I woke up to coffee being brewed, and some morning conversation before I thanked my host and began to make my way towards main st to get some busking in on this beautiful Saturday morning. 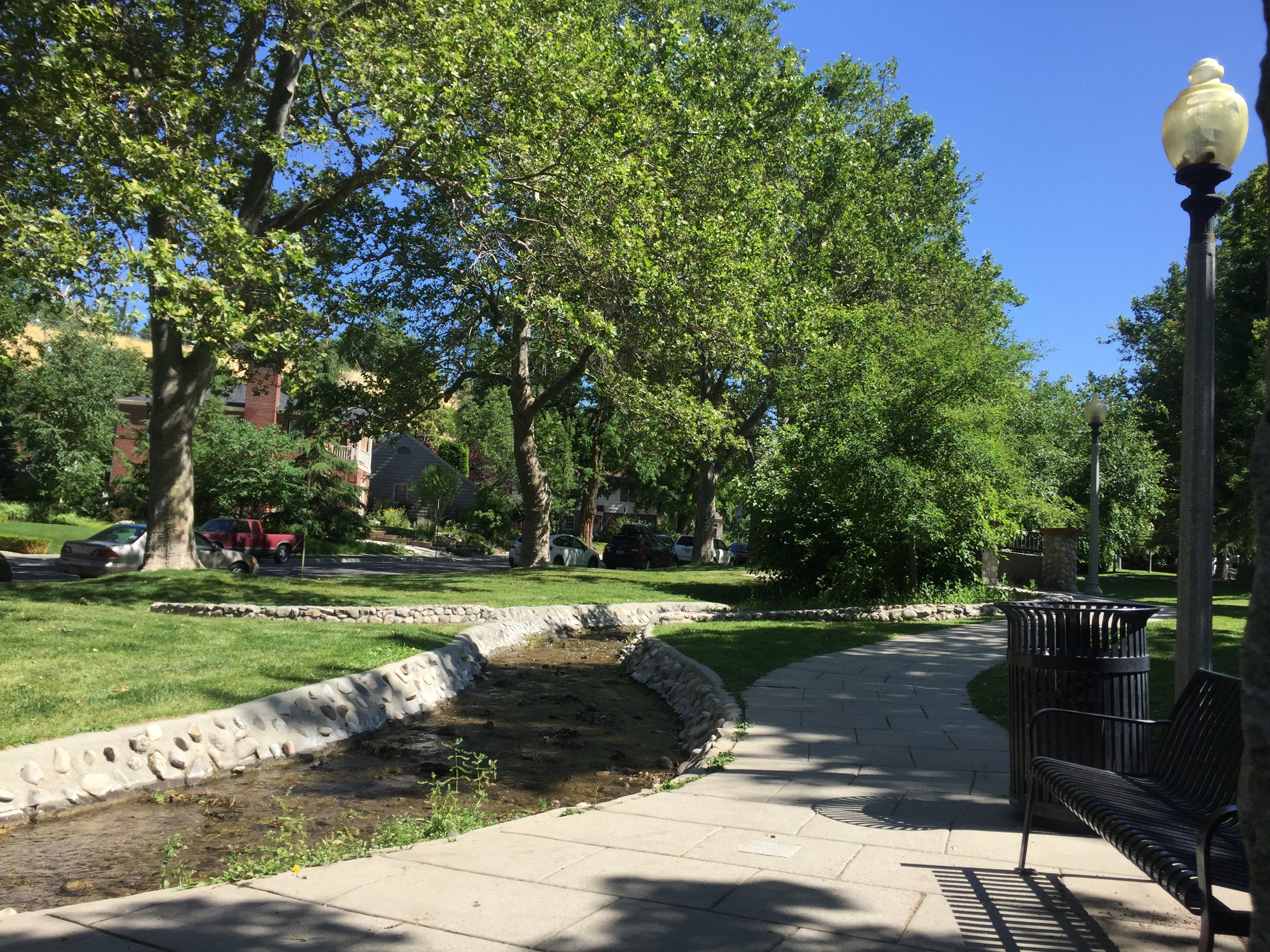 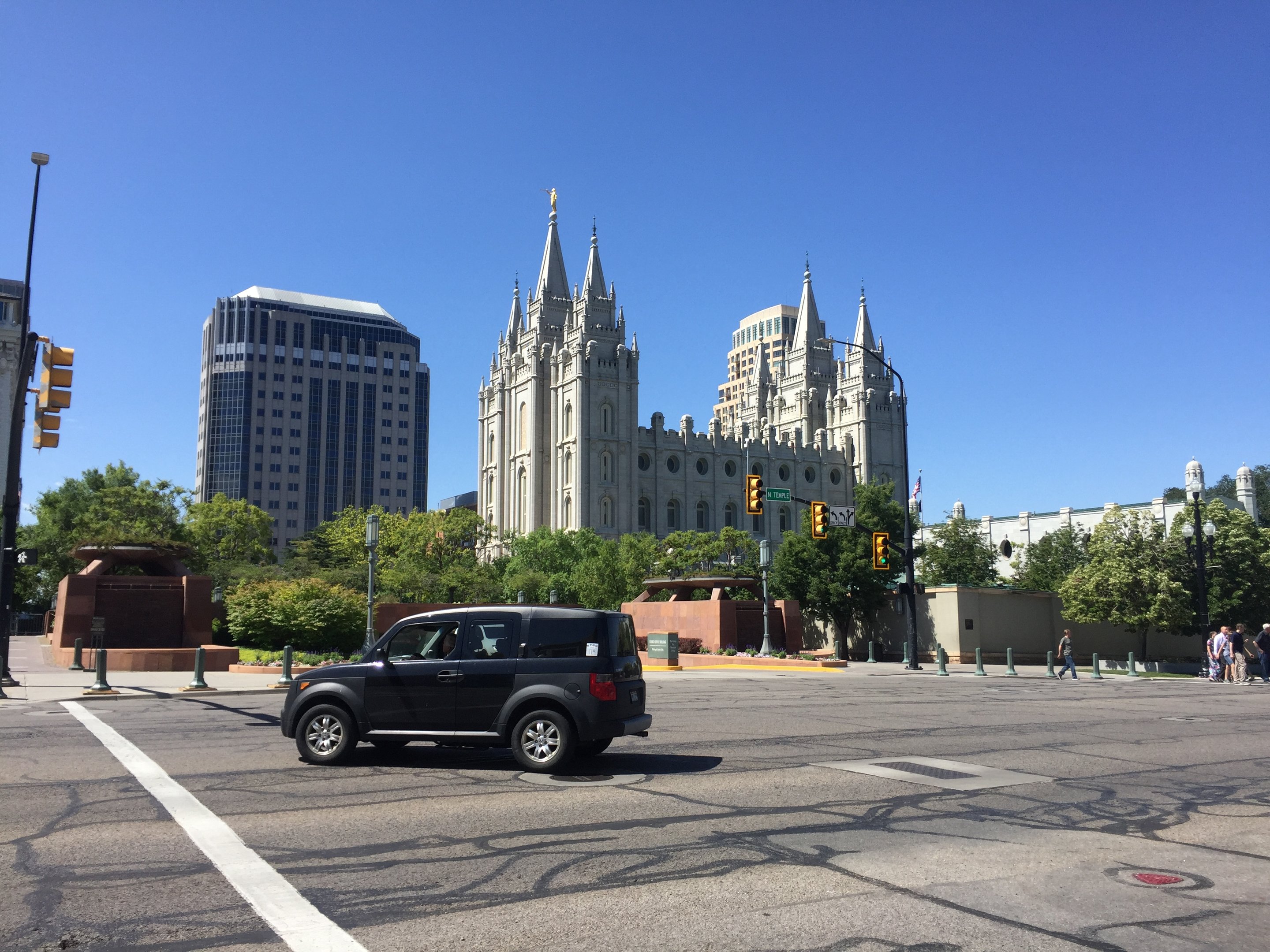 My stroll took me through the cutest little parks, and around giant mormon temples. I was close enough to the headquarters that I could feel the energy of whatever was going on in there, and I marveled at the unique architecture that I was greeted with. After making my way through a maze of intersections, plazas, and storefronts, I found myself on main street, and set myself up to bring some music into the air. It was a little before lunchtime, and I was anticipating folks coming out with leftovers from their meals or generosity enough to get me something for myself. Around 1:30, I had made enough with the little foot traffic that I could get myself a veggie burger, and went back to busk in the afternoon with a belly full of food.

As the sun started to get lower in the sky, I thought that I should get going to a local DIY venue where I heard that a solo singer/songwriter show was happening. I made my way south, and in the setting sun, I came upon a door tucked away behind an alley and paid my $5 cover at the door. I entered the space, marveling at the graffiti on the walls, and smiling at the stickers that touring bands had put up, some of whom I knew personally. I felt at home in this little warehouse, and took a seat on a stool on one side of the wall. The music began, and I enjoyed the acoustic stylings of Taylor Lacey, a fellow who played much like myself. Then, from across the venue on the other side of the room, I saw the coolest thing in the world.

A guy just showed up wearing my shirt. Like, my merch. The last time that I played Salt Lake City as Flower Crown Me A Queen was two years ago. I walked over to him and asked him where he got it since he didn't seem to recognize me. He explained that he had purchased it at a thrift store that morning, and he didn't even know who the band was, he just liked the design of the american flag on fire. He looked up the band, and said that he and his girlfriend were listening to my albums on the way to the show, and actually really enjoyed my music. I asked for a picture, which ended up being the goofiest thing in the world: 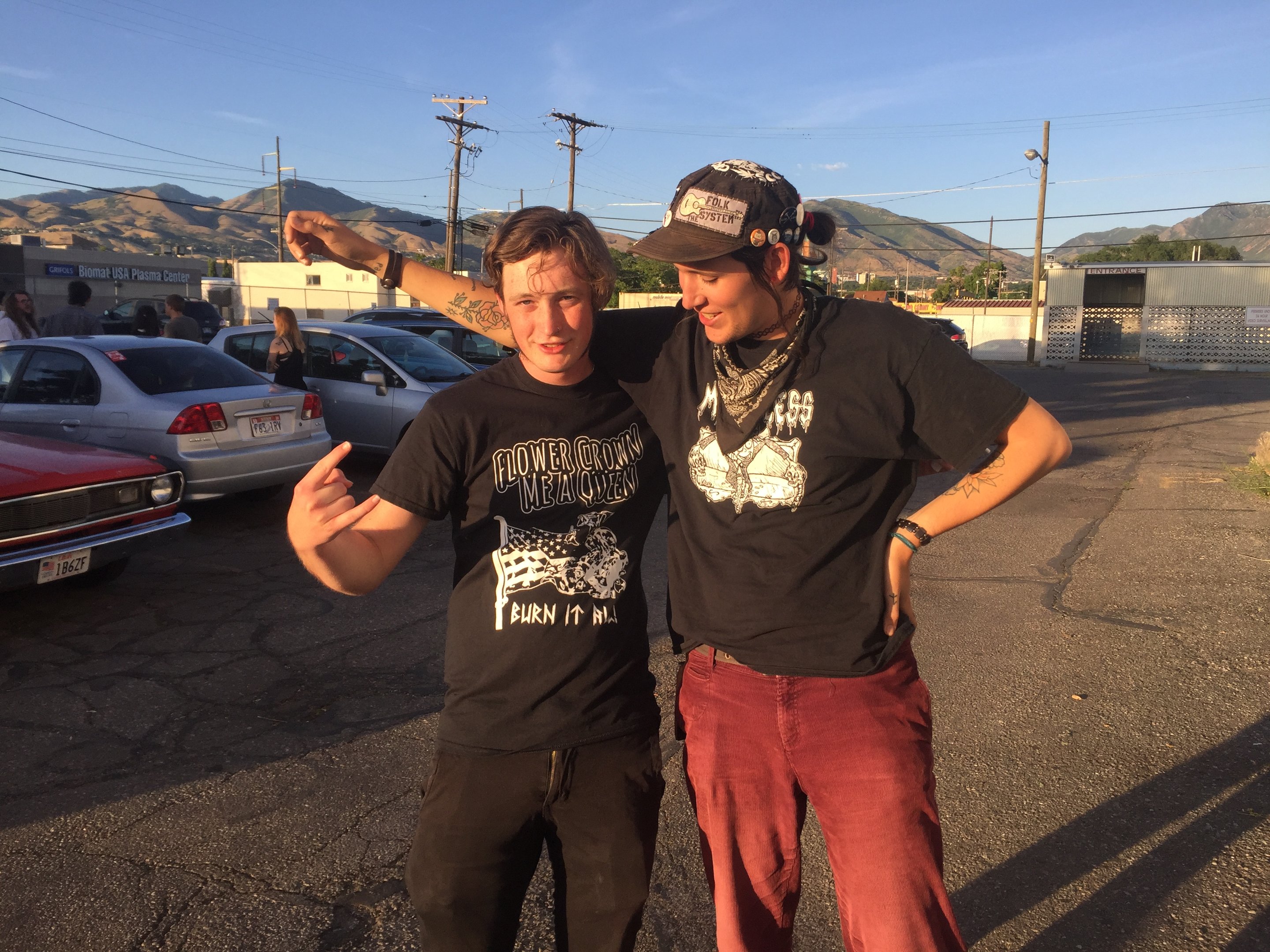 This picture happened because a guy showed up wearing a two-year-old shirt that he had bought that day to a show that I just happened to be at because I accidentally ended up in SLC by catching a ride from a trucker I met on grindr and just decided to check out a show in town while I was here. What the fuck.​
He asked if I was in fact actually playing tonight, because I had my guitar, and I said no, I was just passing through. Unless...

"I'm going to ask the sound guy if I can, because this is too cool of a coincidence not to."

He agreed, and I was able to play four songs in between sets, and people enjoyed it so much that they asked if I had any merch on me. I set it all up on a spare table, and made $25 on merch sales that night, during a show that I wasn't even booked to play. 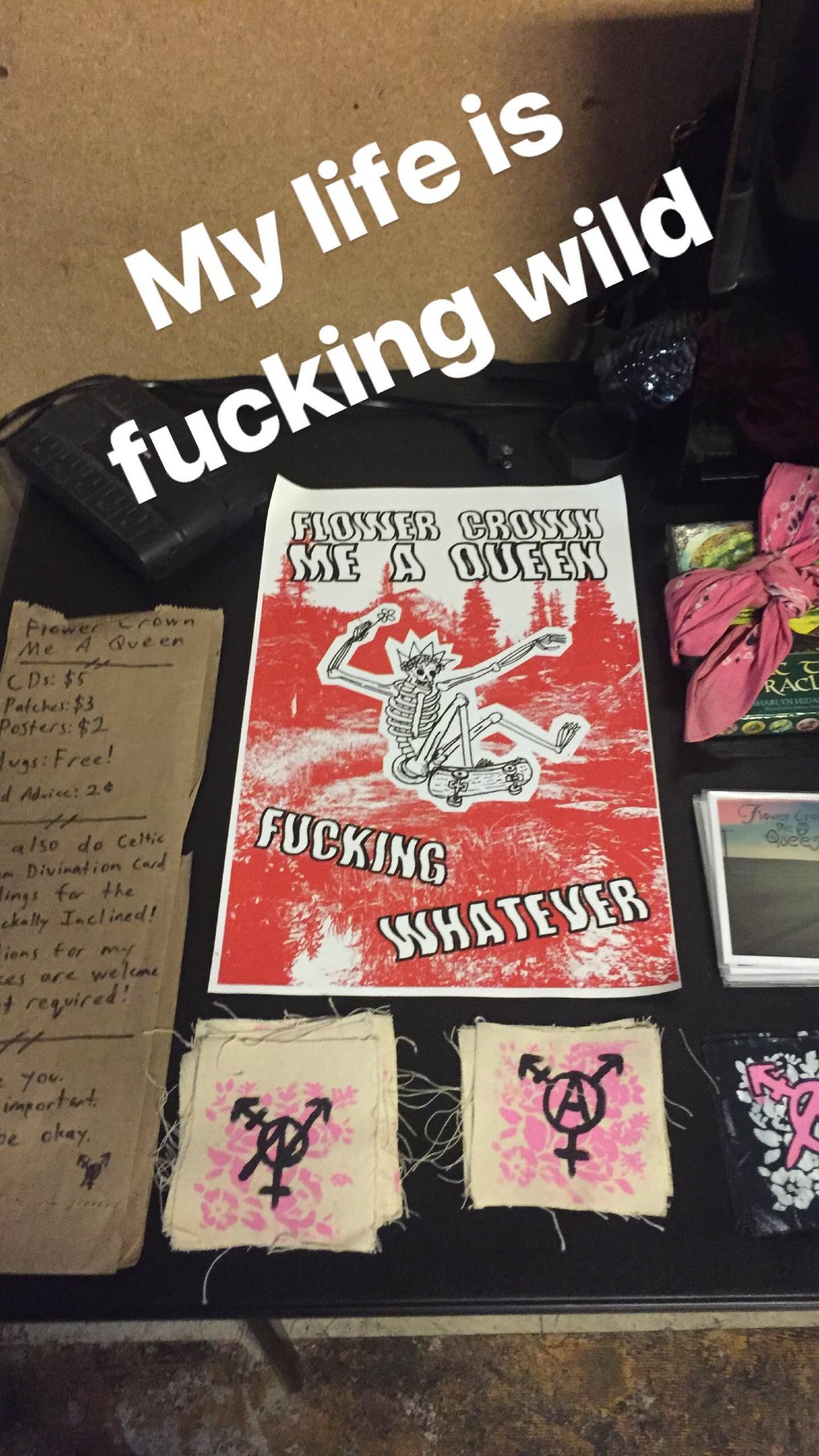 By then, my friend Tiffany had hit me up, and said that I could crash at her place. I caught a ride there from one of the other guys who played the show, and fell asleep on the same couch that I passed out on just two and a half weeks prior while on tour with my other band. I felt that it had been a wonderful weekend in SLC, and I was ready to head back out with Steve once morning came. Salt Lake City was so very kind to me, but I couldn't wait for the lights of Las Vegas that I would be swimming in tomorrow. I fell asleep excited, but awoke to something very different...

Gather all ye near and far
The good word has arrived!

The good word is "Fuck."

Juan Derlust said:
I missed my free merch at Toxic Toast (Sundays are hell) When are you coming back?
Click to expand...

Planning on being in LA around late October. Planning is the operative word here lol

Jesus H. Particular Christ, girl, you are doing it right.

And we see the good karma rolling in this part of the story.

If any shit goes different in future parts, as i sense it may from your scary fore-shadowings in Pt. 1, consider their future lives after you lost sight of them. The Universe balances that shit out, some call it god, some call it entropy, some just know that "What does around, comes around."

I really like the way you write. It keeps me reading, you seem to be able to make the simplest of details exciting. I hope that doesn't read negatively. What I mean is like your first train ride trip report for example. It was a story that took you literally nowhere but it was still a fun read, yanno? I don't think there's too many "I tried to hop a train and got nowhere" stories that would hold my interest but yours did. You're a good writer. Totes following you now, if I'm not already.

Engineer J Lupo said:
I really like the way you write. It keeps me reading, you seem to be able to make the simplest of details exciting. I hope that doesn't read negatively. What I mean is like your first train ride trip report for example. It was a story that took you literally nowhere but it was still a fun read, yanno? I don't think there's too many "I tried to hop a train and got nowhere" stories that would hold my interest but yours did. You're a good writer. Totes following you now, if I'm not already.
Click to expand...

Thank you so fucking much! That means a lot to me, honestly. I like to think that I write like I speak, and I feel like my vocabulary is large enough that I don’t need to repeat words and can use synonyms well enough, so my sentences don’t get redundant. 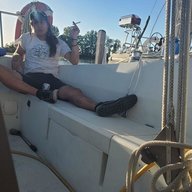 Im glued to this story! I can't wait for the next part. You write so well, even the smallest details are extremely interesting.
D

Matt Derrick said:
I added a link to pt 4 at the end of your story

Ahhh thank you!! What’s the cutoff for being able to edit posts?
You must log in or register to reply here.

Hitchin' Denver to California: What Could Go Wrong? (Pt. 4)

Hitchin' Denver to California: What Could Go Wrong? (Pt. 6) [Final]