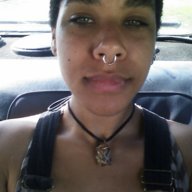 Hi there kitties. I'm new to using StP, but not to the name nor traveling. I've seen most of the states minus the North East and southern Cali.
I'm here to connect with old friends and meet new ones. I've done most of my traveling using my thumb, and gas jugging spiel. I've hopped freight a few times on the west coast; I'm hoping to learn more about the ins and outs of hopping especially on the eastern side of the country as well as Mexico.
I have interests in learning a trade where I don't have to constantly be spanging or gas jugging or forced to play music for people when I'm not in the mood like a fucking dancing monkey.
Fuck off if you're racist, sexist, a homophobe, or any kind of hateful fuck like that.
I believe in a gift exchange economy and do all that I can within my capacity to avoid a life that supports a hierarchal, colonialist, capitalist society.
I'm looking to find more punks that want to act and not just get shwilly and fuck their lives off.
I could go on forever so if you have any questions or comments just hit me up, yo.

I personally enjoy guerrilla theatre. It occupies my time, fills the dull moments when I'm not spray painting "morrissey" graffiti.

Heh by act I mean participate in organisations and actions like Food Not Bombs, Bikes Across Borders, the Beehive Collective, etc. I would put graffiti under the list of taking action. It's small, but can make an idea click in someone's mind or give that fucked off sad kid that message of solidarity that may push them to make a positive change in their life and not off themself or something--depending on the piece. I love street art and making it so maybe I'm biased.

HairyLox said:
Heh by act I mean participate in organisations and actions like Food Not Bombs, Bikes Across Borders, the Beehive Collective, etc. I would put graffiti under the list of taking action. It's small, but can make an idea click in someone's mind or give that fucked off sad kid that message of solidarity that may push them to make a positive change in their life and not off themself or something--depending on the piece. I love street art and making it so maybe I'm biased.
Click to expand...

*also I'm really into the idea of doing guerrilla theatre as a way to spread an idea/direct action.

Hellz fuck yeah. I moved to Aspen specifically to fuck with the super-rich. I was inspired by the scene in fight club where Brad Pitt farts, urinates, and jizzes at banquets. .....and guess what? I'm a banquet server. Ahahaha the VP of India, Al Gore, one of the Mondavis, a couple of Michele Obama's advisers, and Vicente Fox were at a banquet I worked a few weeks ago. Mondavi had his own equerry, serving him his own wine out of ..and I shit you not... A crystal Rams horn. Lol hope they liked the taste of the 'asparagus' and 'foie gras' I added to their duck. Some people call them "A list celebrities". I call them "Shitlist celebrities". Prince Bandar was here till 2006 or so: after being interrogated about 9/11 he funded a 16 million dollar hospital and social services building project...I was like, WTF. If I get indicted by a grand jury or called as a material witness to an international terrorist incident, can I fund some civic projects and then be on my way?! Lol...I enjoy contemplating free living. Alaska's too far away, too isolated, and too f-in cold, so I settle for sandbag bunkers and treehouses. What else? I believe in homeless rights, animal rights, human rights...basically any kind of rights movement you know I'm there. Ahahaha...what else? I got some arborists equipment from Rei so I can start phase II of the Op. Tree tents, tree living, etc. of course I snatched that from Butterfly, but there's nothing new under the sun, right??... I have found that the world is interconnected...For instance, the Mondavi family is business partners with the Rothschilds...the Rothschilds in turn are, or are friends with, Bilderbergers, IMF, CFR, WTO and TLC members...When I first started investigating world inequality, wars, coups, black ops, and G-20 machinations, I kept finding the same names cropping up over and over. For whatever reason these characters all love skiing, so here we are.

Thank you ^__^
Glad to be here.
I don't know why I didn't utilize this site when I was green. I probably didn't know where to start lol.

Awesome I love people who have a passion for activism/taking action! Food not bombs is awesome, best of luck to you in your endeavors! And welcome!!
D

And as far as getting schwilly all the time goes: No war but class war, no cocktails but mmolotovs, brew nothing but trouble!
You must log in or register to reply here.

Politics & Anarchism Apr 13, 2021
Daisy
The Rise of the Rubber Tramps

General Banter May 24, 2015
Trvshwvng
When I get to hell I'll ride there too. (the prequel)