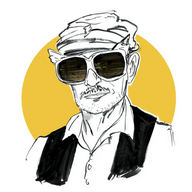 I haven't posted on a forum in at least 5 years so I apologize if I'm screwing this up, that said I like forums way more than social media. Anyhow or who, I'm from Columbus, Ohio. I enjoy hiking, attempted the PCT last year but got sick and had to drop off- I shall return in due time...I fell in love with that damn trail and I will return ! That said, I'm currently working warehouse jobs to fund a go at the Appalachian Trail in 2021 - that's if the plague doesn't screw everything up. After lurking through these forums, I've come to the realization that the lifestyle of a thru-hiker can mirror certain aspects of those who hop trains,squat,etc. - be it gear, hitching, constantly meeting new people, or just a shared open philosophy on the many ways freedom can be defined. I'm sure they're many other aspects but the hour is late and I just wanted to stop in and say hey. I appreciate a good story. I like watching documentaries. I've been on a kick learning about the depression and the dust bowl era lately. Love me some Pete Seeger, Woody Guthrie. Robert Johnson,etc.... love me some R.E.M. ,Patty Griffin, Natalie Merchant,etc. Anyhow, figured I'd say hey and nice to meet you and wish you all the best.

great introduction, welcome! what did you like the most about the PCT? i had a girlfriend that hiked most of the AT and I agree that when the cultures are compared, there's a lot of similarities between thru hiker culture and underground travel in general. I've been thinking a lot about hiking the AT, although it probably wouldn't be until 2022. i'm overweight and in bad shape, so it's going to take some training to get up to snuff physically. but still, sounds like a great way to spend a few months...

This is going to sound cliche, but I liked the people the most and the culture that surrounds it all. I was immediately confronted with people from all over the world, I'm talking France,Switzerland, South Korea,etc...all super stoked to be out there. I had extra respect for those people because it's hard enough doing the research and to get the funds for trail life and gear- they had to get passports, plane tickets and overcome the psychological hurdles of going to a different country and just diving in. Not only did I meet people who barely spoke english I met a married couple who were Deaf- I'm talking full on sign language deaf. Think about that. There's rattlesnakes out there, you will have to hitch to get into towns to resupply. All of that and more in horrible heat, always hunting water sources and you're deaf -that's so badass in my opinion, just saying fuck it, we don't have no limitations, let's go! I met a guy my second day in, his trail name was "Tinker"...71 years old. He was an engineer of sorts back in the day. We had the same pack (Zpacks) ...real quick, if you start going down the gear rabbit hole don't feel pressured to buy these expensive Dyneema fabric (it used to be called cuben) packs. Yeah, they're light but you can get something just as light for a hundred dollars or more cheaper and use a trash compactor bag as a liner. Dyneema fabric is popular because it is incredibly light and water proof but expensive as hell. It's a weird fabric, it's tough in a sense that it won't tear but it will puncture. It's easy to go down the gear rabbit hole and think " I"m gonna get the best " and what you later figure out is that you can get "good enough" that it's still light and just as durable. And you do want light because you want your main weight to be food and water. On the PCT, when first starting out, you're trying to keep at least four liters of water on you every day - sometimes six. I hear water is abundant on the Appalachian. I get lost in this shit. Oh, before I forget, there's these people called "trail angels" some of whom have either hiked the trail you're on or who are just awesome people, people who will leave out "trail magic" like fresh fruit or beers or cheap soda in a cooler under a tree or freeway underpass...sometimes outta the blue. Now you don't come to expect and rely on this but it does happen and when you've been hiking in the heat for 10 and 12 hours, let's just say the hardest of hearts can fall in love with humans again. You find "hiker boxes" (a milk crate, old cooler,etc.) in these small little trail towns or while wandering through a little county park and you can hit paydirt be it food or gear people felt too weighed down by and dropped off...the occasional "devil's lettuce" can even be found in a hiker box. I apologize, I'm long winded. Even though I didn't complete the PCT, it made me fall in love with hiking and at the risk of getting too deep...fall in love with life again. It ruined me for the better. Not to be too judgmental, I know everyone has their own responsibilities and obligations- that said...I just don't understand how some people can call how they live freedom. To each their own and as long as you're not do anyone no harm, if it makes you happy then fair enough I suppose but I just don't get how the 30 year mortgage, wait until I retire to live crowd calls what they do freedom. You will meet people on these trails too that have a story, like how a loved one died two years after retirement and it made them reassess their life's priorities. I met a hiker whose dad committed suicide, I wanna say, 20 years prior...the trail was his therapy. It was therapy for me. It was therapy for me to meet these people. I ramble on too much. I'm outta shape too at the moment, damn Convid shit got me finding comfort in carbs and soda, gotta get ready. I'm wanting to hit the Appalachian Trail in April. There's a ton of other trails out there too like the Arizona Trail which is a little over 800 miles, the Colorado Trail at like 486. I've heard you really gotta know your shit for the Continental Divide Trail, you gotta know your navigational skills for that one. The PCT and Appalachian are pretty well marked and highly travelled (and I highly recommend the app Guthooks) as to where the Continental Divide Trail maybe gets a couple of hundred people a year on it. Thanks again for the warm welcome.
You must log in or register to reply here.

Urban Camping May 18, 2021
BobDole
B
Can the Appalachian Trail Survive ‘A Walk in the Woods?’