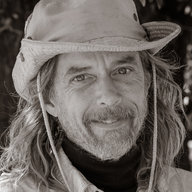 Gypsy was from Cuba, a clerk at a dollar store and had been in the country for five years. She was intrigued after I told her and her coworker about my journey. I teased her with an invitation to leave her job and come with me but that wasn't in the realm of the possible so I left a part of myself in the form of a gift of peace and love stickers then rode on.

Sam was 21 and riding a BMX bike. He'd come back north to get a job but with no luck yet. He was at a McDonald's and said the worker had given him a coffee. It was a true gift. He hadn't asked. He was watching his friend's bike which he'd found there but the friend wasn't there. He showed me his tattoo, a large 420 inked on his forearm which looked like he had done himself. He said, "I'm not ashamed". We became friends and I rode on.

Bruce Wright was an older black man wearing a 109th Airborne cap with blue eyes so bright that it looked like God himself was peering out of them. He greeted me and I stopped, asking him about his service. He was in Vietnam from 69 to 72, a gunner who parachuted in with machine gun and troops. He told about a class he held for teens and the challenge he faced in getting them to understand a higher power as a functional reality and not just an idea.

Mike was a guitarist playing an unamplified white electric guitar which had about a dozen skulls painted into the finish. I found him sitting on a stool on a bike trail. He didn't see me stop and when he noticed me I said, "I'm listening" but I was only listening to what I could see. Mike wasn't playing audibly but his fingers were moving as fast and proficiently as a Satriani.

He was good. I told him about my old friend Martin Gray who would accept guitar donations while he was incarcerated then give the guitars to other prisoners and teach them how to play by making them learn the "H" chord, an imaginary chord only reached by stretching the fingers over five frets. Mike's fingers were long enough to easily make such a chord and he said that his instructor had even longer fingers. We smoked together, then I rode on.

All in a day's ride.

Mission to Rescue the Buddah

Bike Touring Thursday at 11:39 AM
guerrillamountain

Serendipitous encounters of the travelling kind