As of the 1st of this month, I turned 36. To celebrate, I ordered a Pioneer car stereo bundle which included 4 speakers and a car stereo unit (I call it the CSU). The CSU was a Pioneer MVH-S312BT. I also ordered a CPU cooling fan, a desktop computer power supply unit (PSU), and an extension cable for the PSU. I also obtained a wire stripper which will be used to expose wires. On top of that, I came prepared with electrical tape because this will involve a lot of taping. The last thing you hate to do is burn all your stuff or even your house!

It took about 4 days to get the Pioneer bundle, but as soon as I got it, I went straight to work on hooking everything up. I started testing it to make sure everything was wired up properly and working correctly.

The way it turns out, a maintenance guy told me that a PSU is basically an AC/DC converter. To me, it makes sense because when you plug in your PSU to a wall outlet, it draws 120V of AC directly from the wall. The AC power itself is converted to DC power, and the DC power is sent from the PSU to anything it's properly connected to, even your computer's motherboard.

First, I connected the extension cable to the PSU, and then out of 24 wires on a connector, I had to decide which wires were which so I'll know what to work with. I viewed it like this: 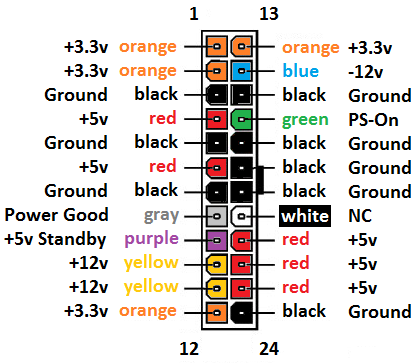 I only needed two black wires which were negative, along with a positive 12V wire (which is yellow), and a positive "power-on" wire (green) If the green wire is not connected to anything, it will not run. If I ground it with one of the negative wires, however, it will run that way.

So on my PSU's extension cord (no, not the actual PSU cord itself), I carefully cut off wires #3 and #16 (black/negative, positive "power-on"). I then exposed the ends of both wires with a wire stripper, I twisted the exposed ends together, and then I sealed it with electrical tape. I double-checked it to make sure it had a good connection and then I tested the PSU itself. I plugged it in to a 120V AC wall outlet, and it worked! I turned it back off and waited a minute or so to de-energize.

Next up, I cut off #11 and #24 (positive 12V, black/negative), then I exposed the ends with a wire stripper. Those two wires were considered for use of live 12V DC power, which is what the PSU will provide to the car stereo. I left it at that.

The purpose of having an extension cord for the PSU so that if the CSU itself doesn't work anymore, replacing a PSU should be just as easy as disconnecting the dead PSU from its extension cord, connecting a new one, and everything works again; no more re-wiring! 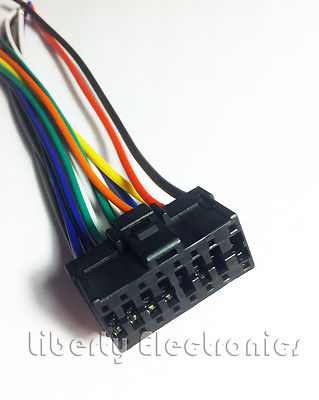 Most harnesses will have at least three known wires to handle live DC power: a black (negative), a yellow, and a red (both positive). For that, I took just those three wires and exposed all three ends with a wire stripper.


Step 3: Connecting the PSU with the CSU

This was a fun and easy part, but it will require safety so it was important to be careful. First, I took both black (negative) wires from the PSU and CSU, I twisted them together, and I sealed the end with electrical tape. Then I did the exact same thing as I twisted the CSU yellow, CSU red, and PSU wire #11.

Step 4: Connecting the speakers with the CSU

Another easy thing to do, as long as you follow your owner's manual of your car stereo and its speakers carefully. For my speakers, I had four pairs of speaker wires, each with a different color:

I found out that each solid wire was a positive while the other same-colored wire with a stripe going through it was a negative. Then I connected additional wires to all ends and sealed the ends with tape. After 45 minutes worth of patience, the wires would allow me to connect the positive and negative wires to their respected terminals on each speaker.

Optional step: Having a CPU cooling fan in place

This one is optional, but be advised that even car stereos will have a heatsink in the back. And it can get above warm, if not, almost good and hot. So I connected a CoolerMaster SickleFlow 120mm cooling fan to the PSU and I placed the fan right behind the car stereo's heatsink. If you decide to have a cooling fan behind or around the back of your stereo, make sure the fan itself runs on 12V DC!

The only thing left to do was testing it all out after all that hard work. I plugged the 120V AC cord back into the PSU and I flicked its power switch. First, the fan lit up and started running, and then "PIONEER" came up on the car stereo! IT WORKS!

As I played music for two hours, it took time to get used to the stereo's settings as far as bass, graphic EQ, and so on. For the CSU's Bluetooth feature, it was easy to change most of my audio settings using the Smartsync app on my phone. But I managed to get some kick-ass car audio quality sound throughout! There was a little downside. Once I turn off the PSU, that means everything is off. The CSU was able to save only my Bluetooth settings, but everything else was wiped out respectfully. Clock, display settings, audio settings, turning off the "demo" feature, and so on.

Overall, this car-audio-in-my-house experience was quite fun and this is something I can finally start rocking out to! All I need now is some plywood material. Then I'll get in touch with someone that can help me build a custom wood box out of it, where I can take the stuff I have wired up and mount it into the plywood - using screws and nails where needed. That is where I can have a homemade boombox down the line, hopefully in the near future.


To the moderator: this topic here falls between both the Music and Project categories, which I noticed the site has forums for both. Please move this to the appropriate forum if needed and let me know if you do.
Last edited: Dec 22, 2018

It's been a few months, but I finally got around to creating a video re-explaining everything - hopefully not too long.

Sweet! Also, if you need a soldering station on the cheap, I'd go for the Weller WLC-100.. Basic but solid station, and I solder all of my electrical connections.. Sounds funny, but I just changed a capacitor in a cheap fan to keep cool in this summer's heat. The fan was a cheapie at about $10 years ago, fixed for thirty cents.
Last edited: Aug 15, 2019
You must log in or register to reply here.

Urban Camping May 18, 2021
BobDole
B
Fellow Anarchists, this is bad.

The Mighty Valley Of Vancouver Island.