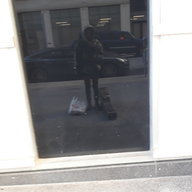 Met a traveler in Ann Arbor he had blonde dreads had a lot of rings on his fingers. We met last summer in graffiti ally and then we met again at the community kitchen he was with a dude named Matt and he had told me instead of going to San Diego I should go to Santa Cruz don't know the guys name but he was really chill would like too see how he's doing he also had some sort of tattoo between his eyes as well.